The third-wave of the Coronavirus pandemic has continued to hit Spain with the Ministry of Health reporting on Monday that another 61,422 new cases had been registered since Friday.

Despite the implementation of national restrictions and regional lockdowns, the numbers have continued to rise unabated with another 401 people losing their lives since Friday, January 8.

It means that the country saw its biggest increase in cases since the pandemic began, bringing the cumulative total to 2,111,782 infections and 52,275 deaths.

At a press conference on Monday, the director of the Health Ministry’s Coordination Center for Health Alerts (CCAES) Fernando Simón warned that the recent Christmas gatherings during the holidays had been the biggest factor for the rise.

He said, “We have perhaps had a better time than we could or should have done and now we have to cope with what is coming”.

Simón said that the most “difficult weeks” were on their way and that he expected the numbers to increase further in the coming days saying that the situation was “not promising”.

He also rejected the idea that the country would need to return to another national lockdown insisting that it was not currently necessary, pointing out the negative impact such restrictions have "on society and the economy". 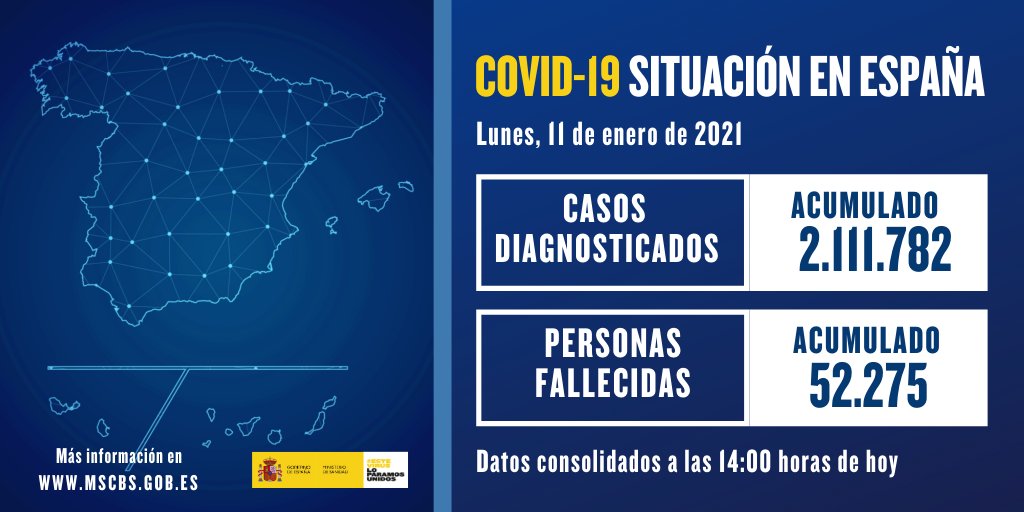 Simón also played down the impact of the British strain of the virus which is thought to be much more transmissible.

During the press conference, Simón said that there had only been around 70 confirmed cases of the British variant found in Spain and that it was the action of the people which was to blame for the spike.

He stressed that it was understandable that there would be cases of the British variant in Spain given the significant population of British nationals living in the country and Spaniards living in the UK with citizens travelling back and forth between the two countries.

It comes as the country continues to prioritise the vaccination of its citizens.

To date, two of the vaccination candidates have now been approved by the EMA (European Medicines Agency) which are the Pfizer/BioNTech and the Moderna vaccines.

Spain has managed to procure over 46 million doses with each citizen requiring at least two doses.

On Monday it was reported that 743,925 doses had now been distributed throughout the country with 406,091 doses being administered to the priority groups so far.