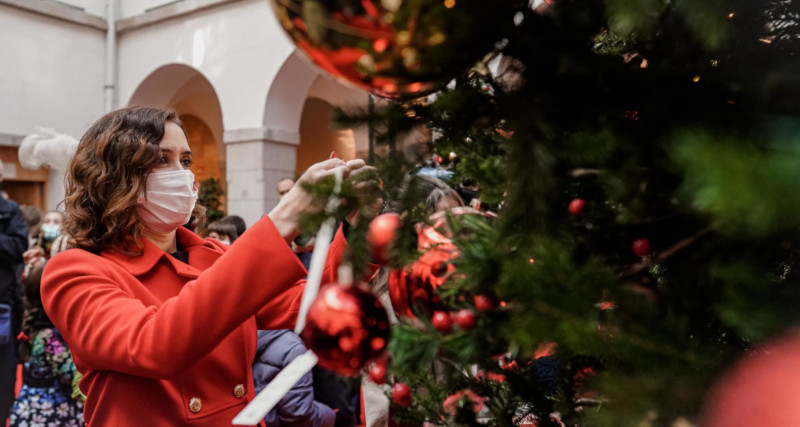 Madrid Will Be First Region To Vaccinate Under 12s From December 15 Health News December 02, 2021

Madrid’s regional president Isabel Díaz Ayuso has announced that all children between the ages of 5 and 11 will be able to get vaccinated in the region from December 15.

The regional government’s focus will be on early detection of the virus, an increase in health staff, public awareness campaigns and vaccinations in a plan that will aim to protect the public while keeping the economy moving.

President Ayuso (pictured) announced her strategy in the run-up to Christmas which will also see those between the ages of 60 and 69 receiving their booster vaccination from December 3.

In addition, the autonomous government will also give a free antigen test to each Madrilenian before the Christmas period which they can pick up from their local pharmacy.

The regional government said that it will be investing an extra €40 million to make sure that the necessary health professionals are available over the winter period.

"Madrid has always been ahead in the fight against the virus since we assumed the reins of the pandemic and now it has been shown that this strategy of reconciling health and the economy is working and that is why we will continue to influence it.

"Rather than returning to massive closures in an alarming way, what we are going to do is not generate confusion and be proactive,” said Ayuso.

Measures To Control The Pandemic Before Christmas

Isabel Díaz Ayuso has outlined her plan which consists of a number of key measures.

The first measure is that the regional government is going to distribute "an antigen test to each Madrilenian" so that when they go to social gatherings they do so "safely."

Around 4 million tests have been purchased and will be available at approximately 3,000 local pharmacies within the region. People will just need to present their health card to get one.

Anyone who is not registered for public health, which is around 600,000 people, can simply present their DNI or NIF.

Public and private health centres started to receive the third booster vaccine dose on Monday. From Friday, December 3, those in their 60s will be able to book a booster appointment.

“The booster shot for the population aged 60 and over will be given six months after completing the initial full vaccination with mRNA vaccines (Pfizer or Moderna) and after three months in the case of those who have received the Johnson & Johnson vaccine or AstraZeneca doses”, Madrid’s regional government said.

Under 12s will receive their vaccinations from December 15

Children between 5 and 11 years will also begin to be vaccinated from December 15.

The announcement comes prior to any official confirmation from Spain’s Vaccination Committee and the Public Health Commission that doses a third of the strength of adult ones should be used in young children.

The European Medicines Agency (EMA) recently approved the use of a lighter Pfizer vaccine for children in this age group, but Spanish health experts are still unsure as to whether it is necessary given the very high vaccination coverage in the adult population.

President Ayuso has also committed to investing another €40 million to deploy all the healthcare professionals necessary until at least the end of winter.

“We’re going to ask the recruitment companies for their collaboration to help us test their employees,” Ayuso explained.

Covid Pandemic Is Reaching Its ‘Endgame’ Says WHO Health News

Spain Approves Covid Booster Vaccine For Everyone Over 18 Health News

Spain's Sixth Wave Showing Signs Of Slowing Down Says Health Minister Spain's minister of health, Carolina Darias has given the country cause for optimism in the face of an ever-increasing number of Covid infections...
Read More

Spain Will Adapt Influenza Surveillance System To Track Covid Infections As the new highly transmissible variant Omicron continues to sweep the country, Spain's authorities have signalled that they may soon adopt a new...
Read More

Spain Records Highest Covid Incidence Rate In Europe Spain has the highest incidence rate of Covid in Europe, after reporting 117,775 new infections and 116 Covid deaths in just a single day. With the...
Read More

Spain Reduces Covid Quarantine Period From 10 To 7 Days Spain’s Inter-Territorial Council of the National Health System (CISNS) which is made up of the Ministry of Health and regional health ministers...
Read More

UK Rolls Out NHS Covid Pass For 12 To 15-Year-Olds For International Travel On Monday, December 13, the UK announced that it would be rolling out its NHS Covid Pass to facilitate international travel for 12 to 15-year-olds. ...
Read More