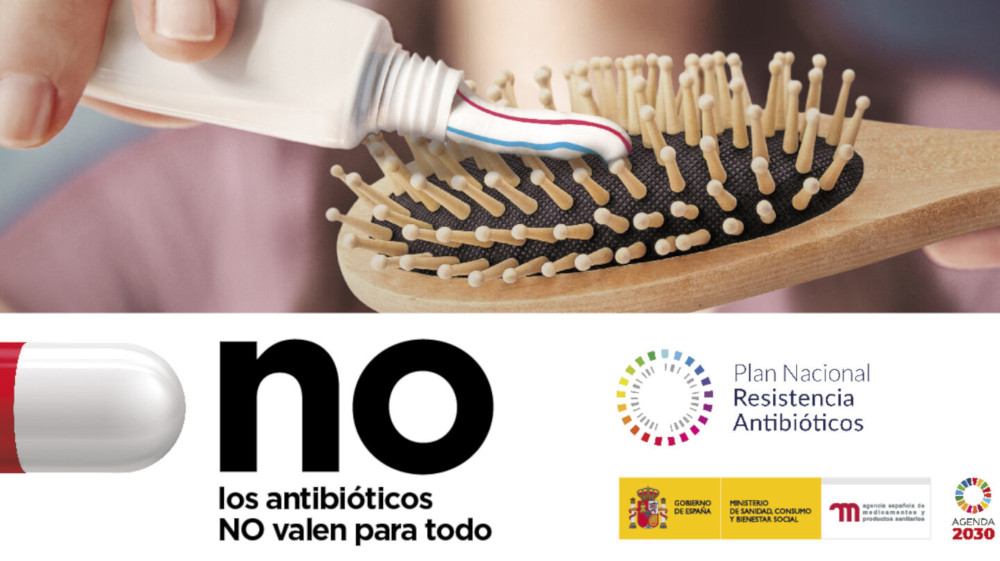 Spain’s Ministry of Health has launched a campaign about the misuse of antibiotics.

The campaign coincides with European Antibiotics Awareness Week and carries the slogan "They can't be used to treat everything" along with an image of toothpaste being applied to a hair brush.

The aim of the whole campaign is to make people stop and think, and be aware of what can happen when they use a product incorrectly. The image quite simply makes us question "What would happen if we tried to clean our teeth with a hairbrush?" and also gives us the message that the product used is not just failing to fulfill the job it is made for, but is actually of no use whatsoever.

The Ministry warns that this is exactly what is happening with the use of antibiotics.

The doctors clarified that antibiotics DO NOT relieve pain or reduce high temperatures, they only treat bacterial infections.

They also say that antibiotics should only be prescribed by a doctor and that self medication of antibiotics used to treat viral infections, such as common flu and colds, can actually increase resistance in future treatments.

Many physicians and pharmacists from many countries also report feeling pressured by patients when it comes to prescribing antibiotics.

To them it seems logical and necessary to try to improve the general public’s knowledge and modify their beliefs and attitudes to antibiotics.

We should also be aware that we need to take antibiotics properly. Specialists say "It is particularly dangerous to not finish a course of antibiotics, because the micro-organism will not be completely eliminated and it will know its enemy in such a way that it learns how to fight against it."

It is equally important to remember to not save leftover antibiotics. Always discard leftovers if any remain once you have finished your course prescribed by your doctor.

Tedros Adhanom, the director general of the WHO, recently warned that one of the greatest challenges we face today in terms of health, is the resistance to antibiotics. Resistance occurs when the bacteria develops the ability to survive exposure to medications that are designed to stop them increasing or kill them.

Around 33,000 people in Europe, 3,000 in Spain, die from this every year. This proves that it is so important for people to be educated about how to use antibiotics correctly.

These statistics are the reason why The Ministry of Health want to spread the knowledge of antibiotic use to the whole nation. Up until November 24th, an advertisement was broadcast on regional and national television to highlight the campaign.

One of the main goals for running the campaign, is to lower the amount of deaths that occur due to hospital infections, that are caused by the resistance to bacteria.

The total cost of the advertising stands at 590,000 euros and the adverts will be shown a massive 1,085 times!