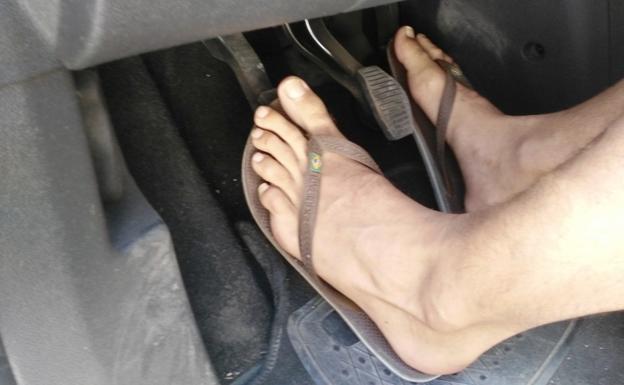 Are you a flip-flop driver?

You know.....do you wear your flip flops when you drive your car?

If so, you may or may not be surprised to know that you can be fined for wearing them whilst driving with a possible fine of up to 200 euros!

Flip flops have the potential to move around and get stuck under the pedal causing you to lose concentration or direct loss of control of the vehicle.

In a recent statement by the Guardia Civil, which was then reiterated by the DGT (Dirección General de Tráfico) it was announced that Guardia Civil traffic officers will have sole (no pun intended) discretion when determining whether a driver should be fined or not for driving in flip flops. You can see their tweet below.

The tweet above translated is: "A fine for driving with flip flops? Yes, believe it, they can penalize you when the conduct impedes the freedom of movement of the driver or the control of the vehicle and thereby jeopardises the safety of the road."

The law can seem somewhat ambiguous in this area and that’s probably a good thing as if a more rigid stance were taken, the Guardia Civil could potentially pull up and fine every driver on the road for some trivial infringement. Eating a banana, having your elbow out of the window, drinking from a can or a bottle, lighting a cigarette etc, all have the potential to be punished by a traffic officer.

Some of the current offences you may be surprised to know you can be fined for include:-

In all of the above cases it is not the act of doing any of them that is necessarily the problem. It is a case of whether it caused you to drive your vehicle in an unsafe manner or not and that is at the Guardia Civil’s ‘discretion’.

Other seemingly innocuous offences, which you may also be fined for include:-

Clarification on the Law

The driving laws in Spain clearly state that the driver must :-

So, you’ve been warned!

It doesn’t take much effort to carry a spare pair of shoes with you when driving and it could well save you a big fine not to mention prevent you from having a nasty accident.

Think before you do anything in your vehicle. It’s not necessarily the law. It’s the police officers opinion that matters!!