Whether you live here in Spain permanently or are just visiting for your holidays, you will have ample opportunity to savour some of the country’s most popular foods.

Our list below is by no means exhaustive and doesn’t do Spain’s culinary repertoire justice, however, we think that the dishes and foods below account for the vast majority of the most popular traditional foods.

We have also included some recipes and instructional videos so you can give each one a try.

So what’s your favourite?

** WARNING - The images below may make your tummy rumble! 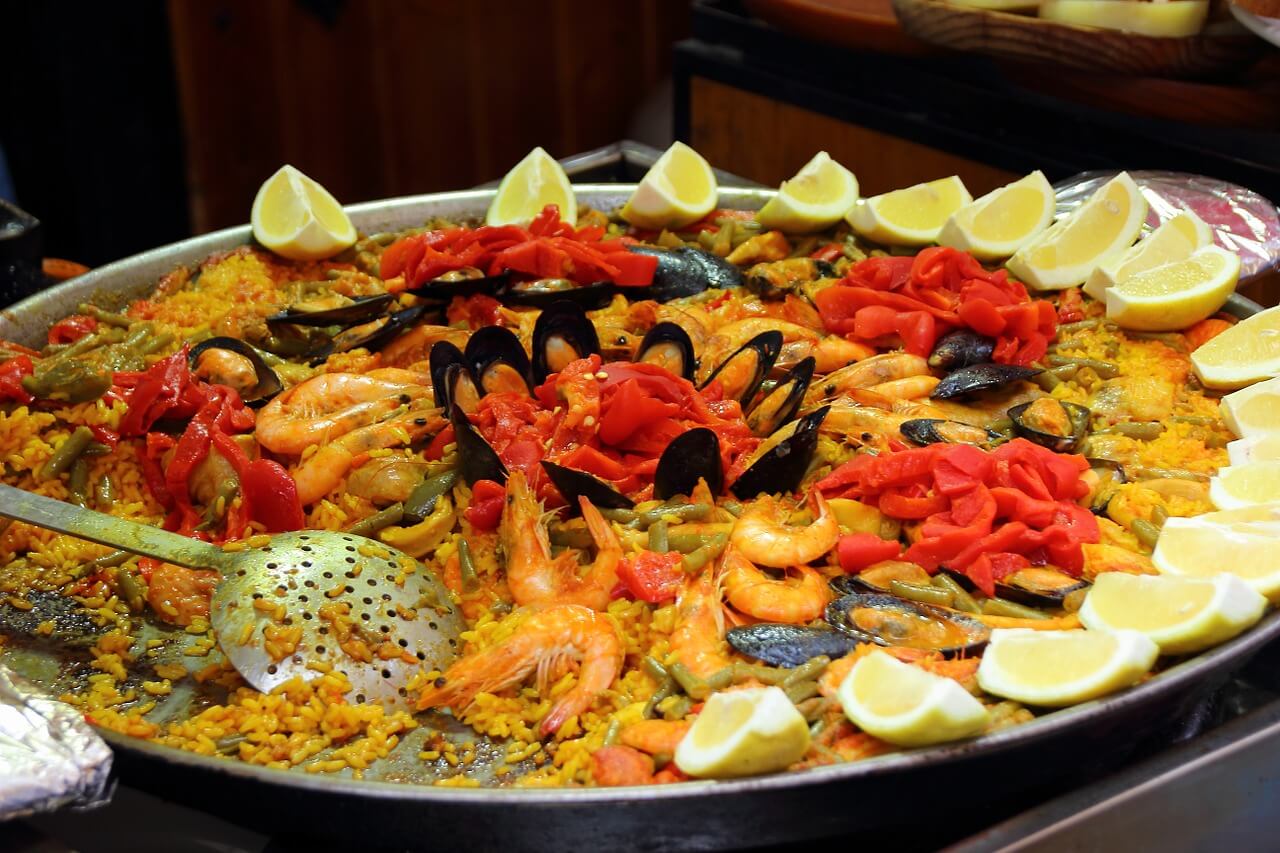 Image by meineresterampe from Pixabay

First concocted in the mid 19th Century in the Albufera Lagoon area close to the city of Valencia, Paella has become synonymous with Spanish cuisine.

The dish is undoubtedly one of the most famous Spanish meals and often mistaken as the country’s national dish. However, most Spaniards will tell you that Paella is a Valencian dish and not a national one.

The word Paella is actually a Valencian word for “frying pan” and takes its name from the traditional shallow pan typically used to cook the dish.

Paella is characterised by its bright yellow colour which comes from the saffron ingredient. A Valenciana paella traditionally contains chicken and/or rabbit, however, another popular version is ‘Paella de Marisco’  (pictured) which replaces meat with seafood such as prawns, calamari, mussels or even clams. The seafood variety can usually be found more in coastal areas of Spain.

As a variation on the traditional Paella dish, why not try black paella which contains octopus or squid ink?

A collection of paella recipes can be seen here.

Another traditional favourite is Patatas Bravas which you will often find included within small tapas dishes. Patatas Bravas or “Brave Potatoes” is characterised by its fiery red sauce which is unusual in a country that doesn’t generally embrace hot or spicy foods.

A staple among Spaniards, the source is accompanied by cubes of fried potatoes.

A very simple dish to prepare as a side or tapa and a favourite all over the country.

You can see a great video on how to make patatas bravas from scratch here.

A nice patatas bravas recipe can be found here. 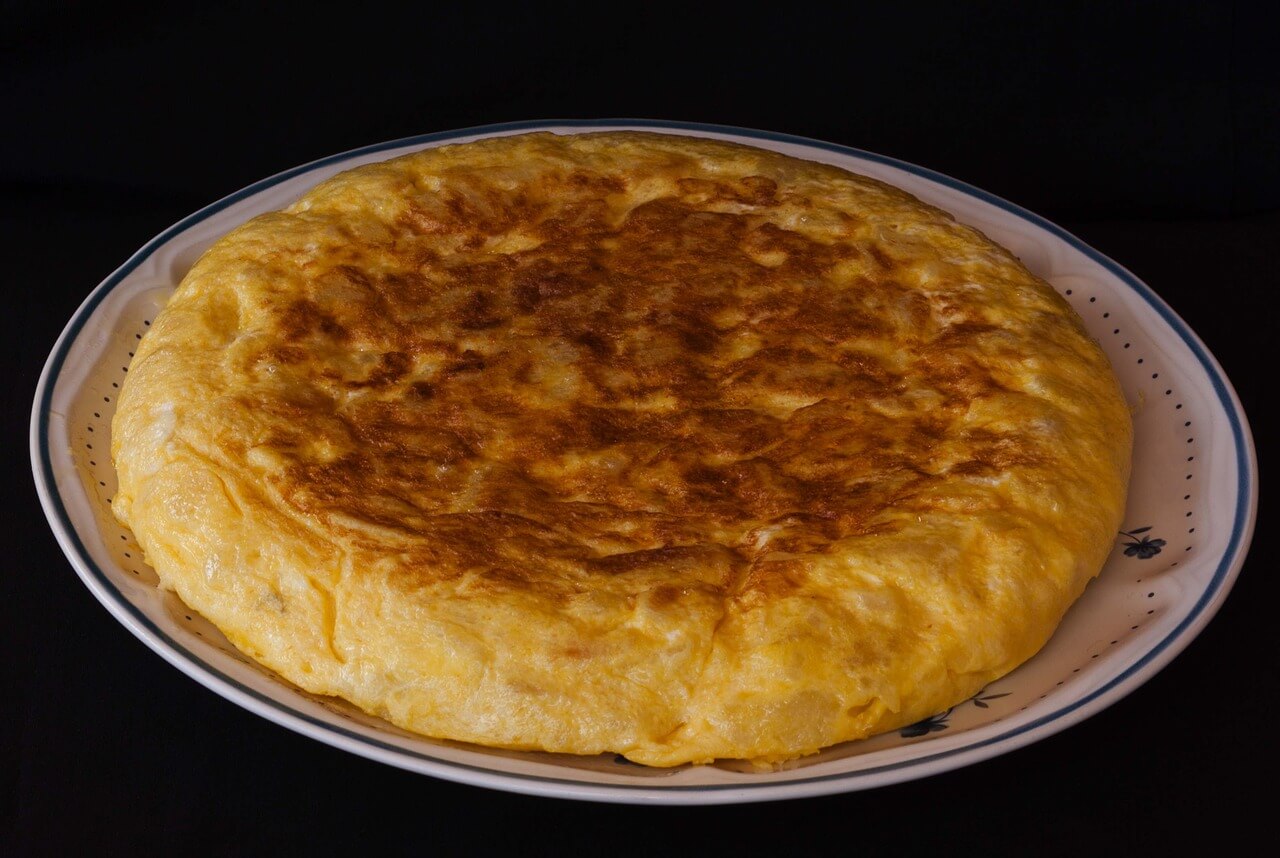 Tortilla Española or ‘Spanish Omelette’ is another extremely popular snack often served as a tapa (small portion) in restaurants up and down the country.

The tortilla is very versatile and may be eaten as a main, as a snack or even in a sandwich or baguette.

Traditionally, a Tortilla Española will only contain diced fried potatoes and eggs although onions are also a common addition. Other variations can be found which contain chorizo or peppers much to the dismay of the local’s...

You can view a video below of how to make a simple Tortilla Española.

Some recipes can be found at the following pages. 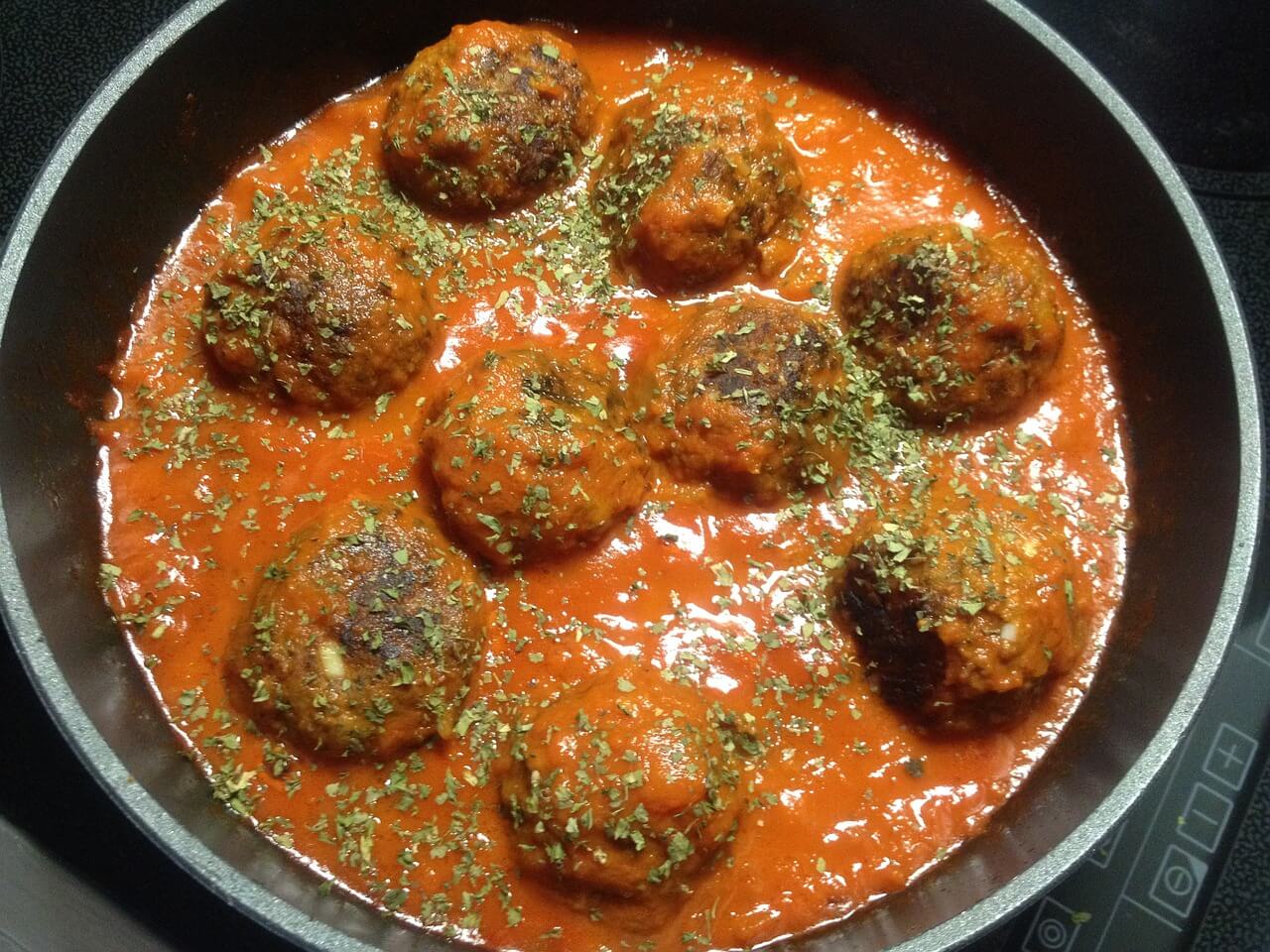 Albondigas or Spanish meatballs are traditionally served as a tapa throughout Spain.

These small meatballs are very versatile and can be served as an appetizer, a tapa or as a main dish.

Albondigas are traditionally made with pork, veal or beef, or a mixture of all three and are cooked in a flavoursome tomato sauce. They are great served with a chunk of baguette and a glass of red wine. 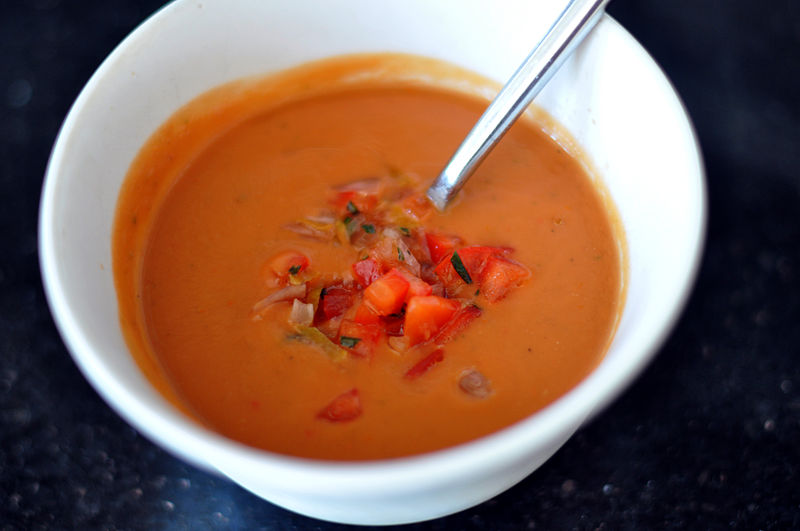 Originating from the most southerly region of Andalucia, this tomato-based soup is most famous for being served cold.

Mostly served as a first course to a meal, this chilled soup is a welcomed, refreshing choice when dining in the Spanish sun.

A blend of tomatoes, onion, pepper, cucumber and garlic, along with olive oil, salt, water and wine vinegar, the flavoursome Gazpacho is then topped with fresh chopped cucumber, onion, pepper and tomatoes and is definitely a Spanish dish you need to try. 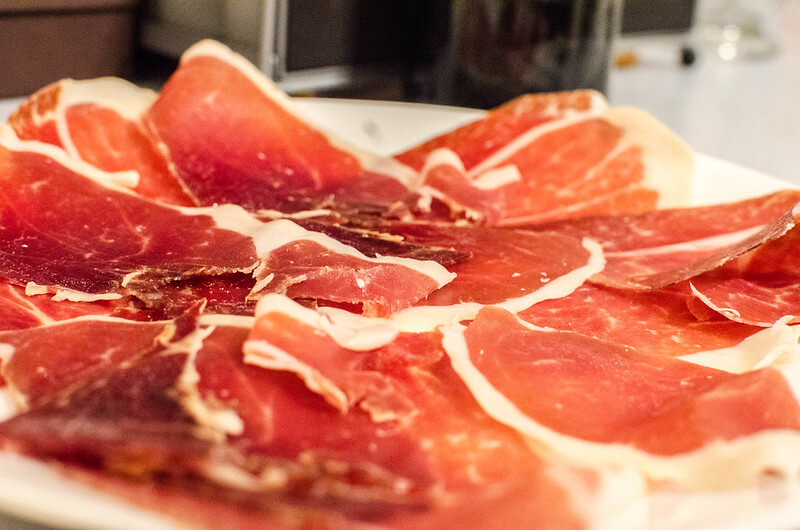 Jamón or cured ham is the most recognised Spanish food, with a massive 40 million hams produced each year.

Enjoyed as a tapa or a starter with a glass of sherry or Cava, it really does get your juices flowing for the meal you have yet to enjoy. 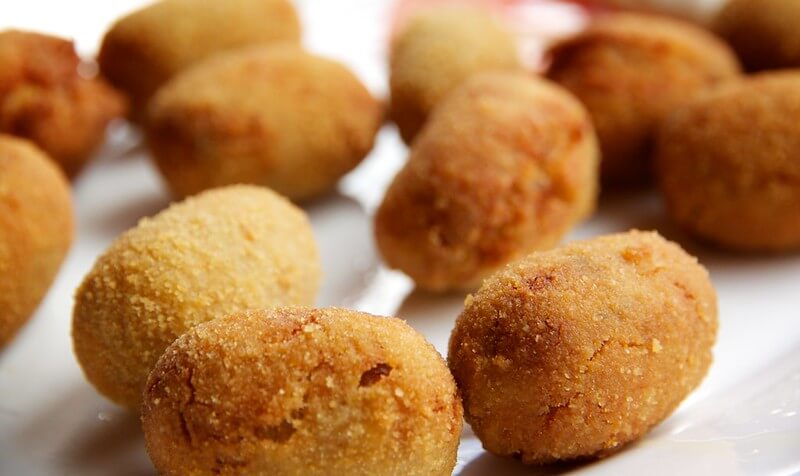 Croquetas or croquettes are another typical item that you will find on a tapas menu.

Due to their creaminess, many people think that the filling is made from cheese, but the filling is actually bechamel sauce that is encased in fried breadcrumbs with the addition of chicken, jamón or salt cod and they are very tasty!

Although they are on every tapas menu, croquetas can also be eaten as part of a main meal. 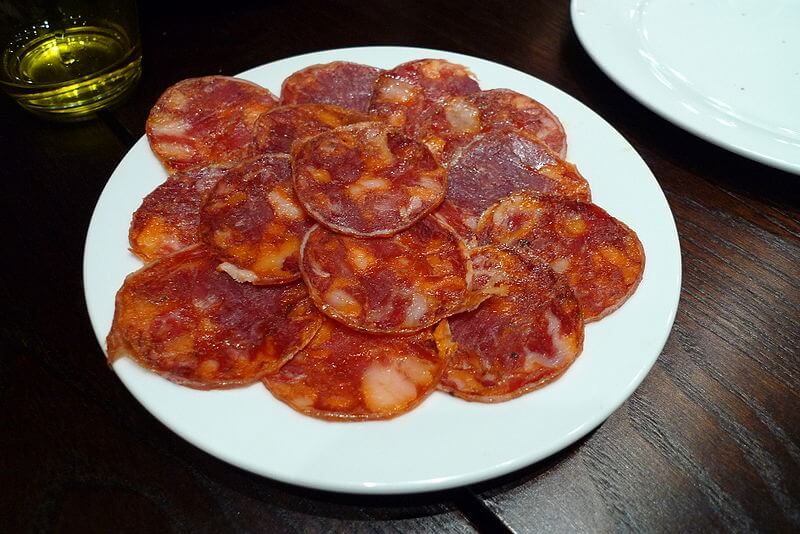 Spanish chorizo is a type of pork sausage that is fermented, cured and smoked. Seasoned with garlic, pimenton (smoked paprika) and salt, it can be either picante (spicy) or dulce (sweet). This is determined by the type of pimenton used.

Depending on the variety, chorizo is often eaten sliced and uncooked, in a sandwich or baguette roll or fried, grilled, or baked as an ingredient to many traditional Spanish dishes.

It is also very popular as a tapas dish and makes a great accompaniment for Spanish cheeses such as Manchego. 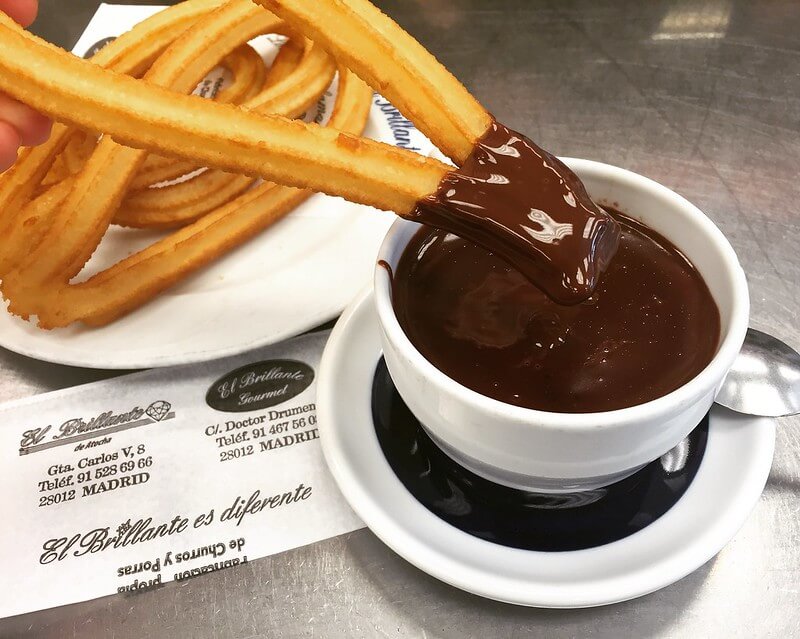 Churros are a popular sweet snack made from fried dough pastry which is cut into sausage shapes, deep-fried and doused in sugar and or cinnamon.

They are a big favourite at fiestas, ferias and street parties when they're sold by street vendors.

Dipping churros into thick hot melted chocolate is law and is something you will see in every cafe and coffee shop across the whole of Spain. 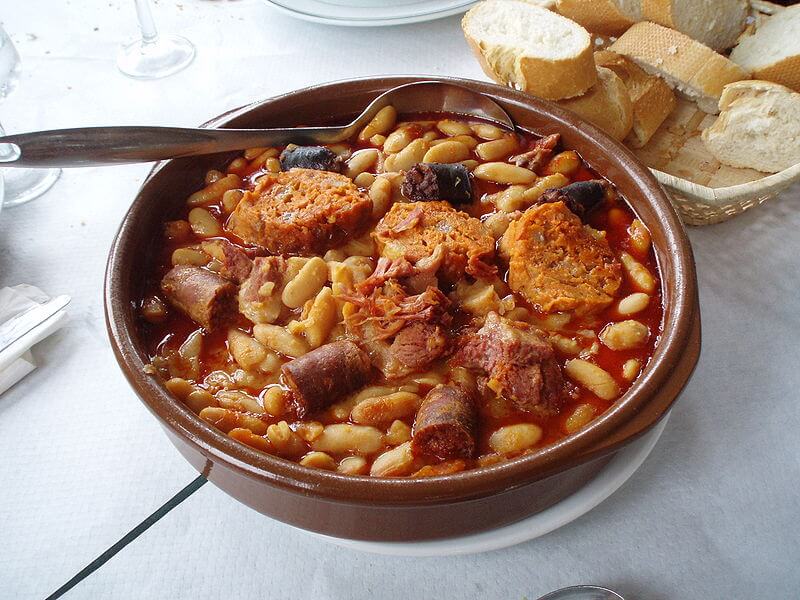 Looking for a hearty winter dish? Then Fabada could solve your mealtime dilemma.

Hailing from the Asturias region of Spain, Fabada Asturiana is a one-pot bean stew with its main ingredient being Fabe beans (Fabes de la Granja).

Common ingredients also commonly found include pork belly, chorizo, pancetta/bacon and Morcilla which is a little like the UK’s black pudding.

The dish is thought to be a favourite of the mountain dwellers of the region and great for warming you up during the colder winter months. 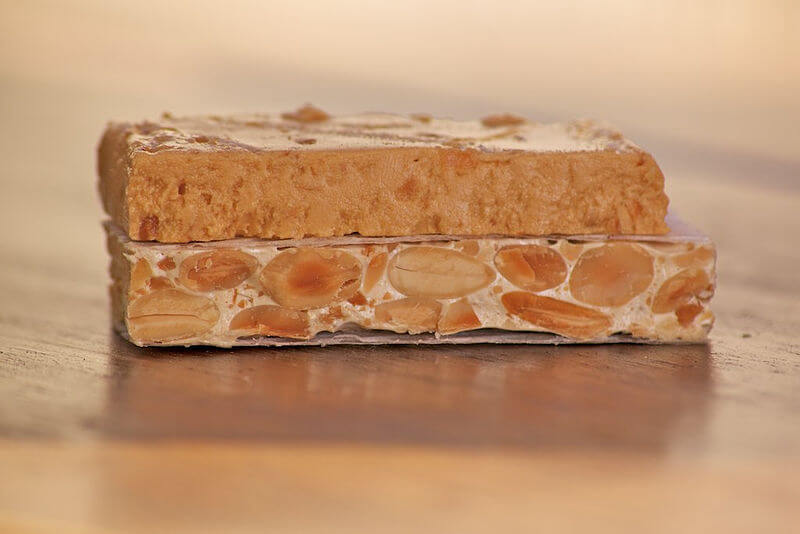 Typically made of honey, egg whites, sugar and toasted almonds or other nuts, Turrón is a southern European nougat confection.

Usually shaped into a rectangular tablet or a round cake, Turrón has a rich, sweet and nutty flavour and can be either hard and brittle, or soft and toffee-like. Colour-wise it can range from white to the deepest caramel.

It is regularly devoured as a traditional Christmas dessert in Spain, and you will find it in all of the supermarkets and confectionery stores across the country.