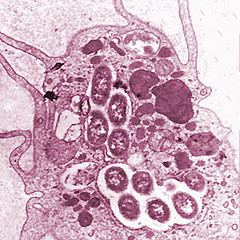 What is Legionnaire's Disease?

We’ve been hearing a lot about Legionnaire's disease (Legionellosis) in the media with a number of cases being recently identified in Edinburgh, Scotland . We thought that this would be a good time to learn more about this disease, how it is contracted and how it is usually treated.

Legionnaire’s disease is a potentially fatal Pneumonia type disease caused by the Gram-Negative bacteria Legionella Pneumophila. The disease first acquired its name in July 1976 when an outbreak of Pneumonia occurred among a number of people who were attending a conference of the American Legion. In total, 231 people were struck by the disease, with a total of 34 deaths.

Less severe cases are sometimes referred to as Pontiac Fever, where only Flu like symptoms exist but do not lead to Pneumonia (lung infection) which is the case with full blown Legionnaire's disease.

Legionnaire’s disease is caught by the inhalation of contaminated water droplets but is not contagious and cannot be passed from person to person.

Where is the Legionella Bacteria Found?

Legionella is quite commonly associated with hotels, cruise ships, office blocks and hospitals where cooling systems and pipe work have not been very well maintained.

There are usually strict regulations and guidelines on the maintenance of water supply systems. Water should be cooled below 20 c and heated above 60 c as this can help to prevent any potential outbreak of Legionnaire's disease.

What are the Symptoms of Legionnaire's Disease?

The symptoms of Legionnaire's disease are fairly similar to those of the Flu virus and thus can be difficult to diagnose without a blood or urine test.

Symptoms are generally visible anywhere from 2 to 19 days after exposure, however, 6 to 7 days between getting the infection and the onset of symptoms (incubation period) is most common.

How can Legionnaire's Disease be Treated?

Legionnaire's disease is most commonly treated using antibiotics such as clarithromycin or erythromycin administered via tablets or via intravenous drip. Treatment usually lasts around 7 to 10 days.

Further Sources of Information can be Found at