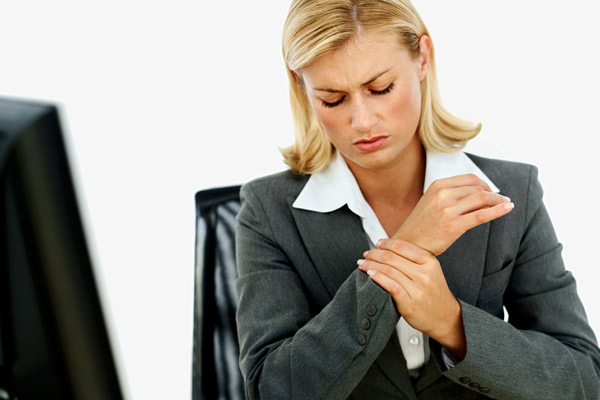 Repetitive Strain Injury (RSI) is a condition that affects millions of people across the world. It is brought about (as the name suggests) by the repetition of certain physical actions which result in an injury being sustained to the limbs. The most usual parts of the body that are affected tend to be the hands, wrists, elbows and shoulders; in other words the upper limbs, giving rise to the alternative term WRULD (Work Related Upper Limb Disorder).  One of the most common complaints of RSI comes from people who regularly use computers or keyboards. The act of typing for prolonged, regular period often induces RSI to the wrist.

RSI can however affect the lower limbs too, especially if you work in a job that involves a lot of kneeling, or operating a machine using a foot pedal.

Repetitive strain injury manifests itself under others names depending on which part of the body it affects. These include:

The Symptoms of RSI

The majority of instances of RSI are caused in the workplace. It is however quite possible to induce RSI through playing sport or even cleaning the house. It is the repetitive nature of the action, not where it takes, place that is the culprit. The symptoms of repetitive strain injury are varied and include:

There is also something known as diffuse RSI. This is where a variety of symptoms are in evidence, but there are no visible signs, nor any not specific diagnosis. Diffuse RSI is also referred to as “non-specific pain syndrome”.  As well as movement repetition, Diffuse RSI can also be caused through assuming a bad body posture. It can also be stress related.

Prevention is Better than Cure

There is an old saying that prevention is better than cure, and it is certainly true. With health and safety in the workplace being taken much more seriously these days, some items to help prevent RSI have found their way into the PPE (Personal Protective Equipment) lockers in many companies. Things like wrist supports and foot rests. Preventing RSI from happening is not only good for the individual, but good for the employer too as it helps to reduce time off work.

There are various treatments used to combat RSI depending on the nature of the problem. These include, but are not limited to:

The good news is that RSI is treatable, and curable. The key is to act quickly once symptoms have been detected. This will speed recovery and dramatically reduce the possibility of any lasting damage being done.

For further information on how to prevent RSI, please take a look at the NHS page How to Prevent RSI.