Property rental prices have increased by a staggering 52% in the last five years according to a recent report by property website, Fotocasa.

Fotocasa’s Director of Communications, Anaïs López said, “The demand for rental housing has taken off strongly in Spain in recent years and has pushed prices to grow a lot in a short time. This fact added to the shortage of housing for rent in our country, explains the large increases that we are registering. In fact, in nine autonomous communities, the maximum prices that had been reached in the years of the real estate bubble have been exceeded in recent months”.

Valencia, Catalonia, Madrid and the Canaries have been hit hardest

Not all autonomous communities have seen the same increase with those renting in Valencia, Catalonia, the Canaries and the capital Madrid seeing the biggest hikes according to the study. 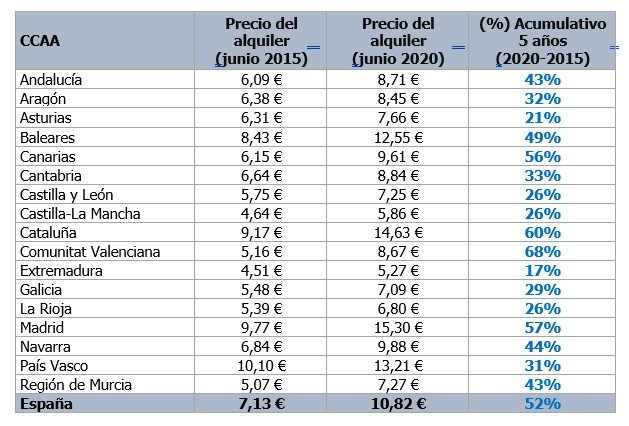 When assessing the increase per city the report showed that it was Valencia that saw the biggest rise of 77%.

Spain Updates Face Mask Wearing Rules From Saturday June 26 New face mask rules in Spain will come into effect on Saturday, June 26. Face coverings will no longer have to be worn outdoors if a 1.5-meter...
Read More

Spain Expected To Be Added To The UK’s Green List On Thursday Brits will find out on Thursday which countries will be placed on the green holiday list in the latest update, with Spain, Greece and Italy looking...
Read More

Spain Extends UK Driving Licence Validity Until 31 October 2021 Spain has announced that it will be extending the current validity of UK driving licences giving British nationals more time to carry out the exchange...
Read More

Spain Lifts Covid Testing Requirement For Travellers From Germany, Italy, Austria And Other EU Countries Spain has announced that many regions in Italy and Germany, as well as several other countries, can now enter the country without producing a negative...
Read More

Spain Expected To Abolish The Mandatory Wearing Of Masks The current ‘wearing face masks out in public’ rule may soon be a thing of the past in public places, according to Spanish Prime Minister Pedro...
Read More

Spanish Holidays For Brits Now Unlikely Until August After Final Lockdown Easing Delayed British holidaymakers are unlikely to return to Spain until August after Boris Johnson delayed the final phase of lockdown. In yet another bitter...
Read More

Spain Reopens To Fully Vaccinated Non-EU Travellers From Monday, June 7, Spain will once again allow visitors from outside of the EU and Schengen Zone to enter the country, providing they can prove they...
Read More

UK Keeps Spain On Amber List In Blow To Tourism Sector Spain will remain off of the UK’s green safe travel list, it was announced on Thursday. The announcement followed the government’s three-weekly...
Read More