What Venomous Snakes And Spiders Are There In Spain? Expat Tips Published: 21 November 2022 16:37 CET

When you think of countries with venomous snakes and spiders, Spain isn’t one that comes to mind.

But did you know that Spain is in fact home to 13 different types of snakes and more than 1,700 species of spiders? Luckily though only five of the snakes and six of the spiders are venomous and potentially dangerous to humans.

In this article, we have tried to answer as many of your questions as possible in regard to venomous snakes and spiders native to Spain. You can expect to find the answers to the following questions and more...

Let’s get some answers to these questions …

Which snakes are a danger to human life?

Luckily snake bites are rare in Spain and according to a scientific report carried out by J.P. Chippaux, it is estimated that between one and seven people in Europe are killed by a snake bite each year.

The five snakes that are venomous are:

The Asp Viper - The Asp viper is brown in colour with black stripes. It is highly poisonous, its bite is very painful and untreated bites can be fatal.

Symptoms of a bite begin with sharp pain, followed by swelling and bruising. A venomous bite can cause rapid deterioration of blood vessels, leading to problems with vision.

However, it is important to note that asps typically deliver a ‘dry bite’ which is a bite that doesn’t inject poison. Whilst still very painful, it is not life-threatening.

Only a very frightened asp will deliver a poisonous bite.

This snake is harmless to humans, although it does have venomous glands. Its poison is not really active, besides given the size of its mouth and the position of its teeth releasing poison, it is almost impossible that a human could be affected if bitten. A little reaction could still occur, like a slight swelling around the bitten area. 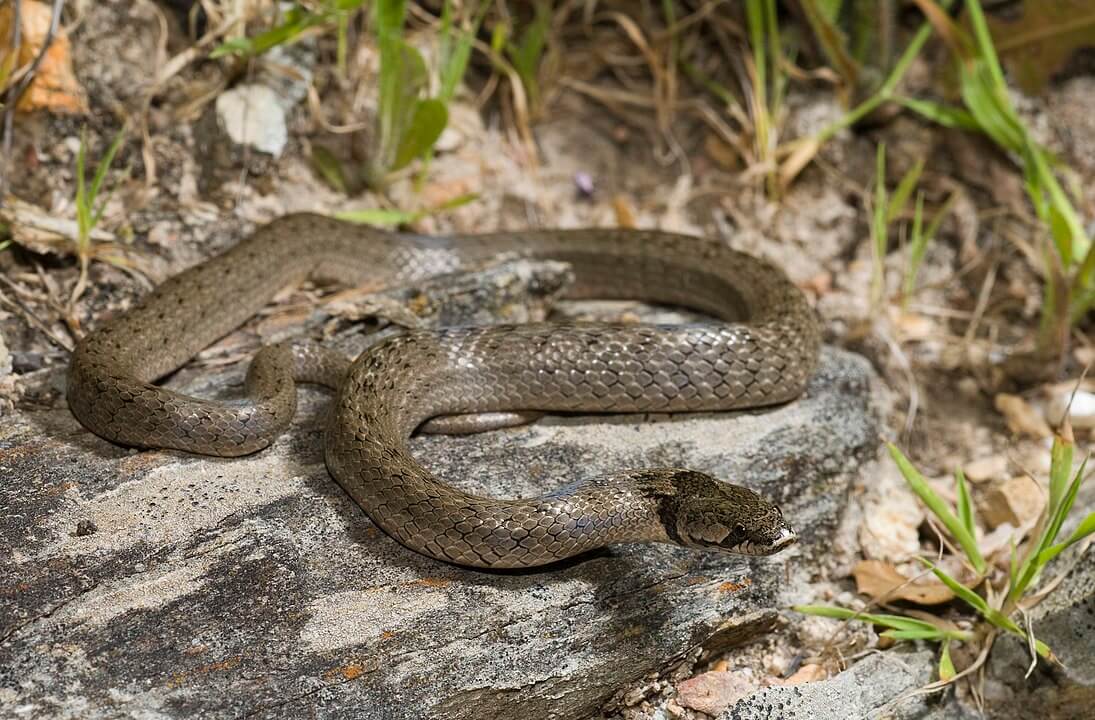 The Montpellier Snake - The Montpellier snake is very long and is blue or greenish with a white underbelly. Bites from this type of snake are also rare due to the location of its fangs. If you should get bitten by one it may be very painful but the venom is quite mild, so is unlikely to cause serious health issues.

Montpellier Snakes inject venom when they bite, but it is generally not known to be lethal. Symptoms from the bite could include pain, swelling and numbness in the affected area, headache, nausea and vomiting, diarrhoea, lightheadedness, seizures and in some cases collapsing.

Seoane’s Viper (Top Image)– The Seoane’s viper is a highly polymorphic species with four different colour patterns. They can be beige or light grey in colour, with a brown zig-zag pattern, a brownish morph with no pattern, or they can have a fragmented zigzag pattern or have a twin-striped pattern, with the ground colour described as two narrow, straight, dorsolateral longitudinal lines along the body.

A bite from one of these snakes is not normally life-threatening, but could be if the person bitten is a child, elderly or suffers from certain illnesses.

Snub-Nosed or Lataste’s Viper - The snub-nosed viper is so-called because it has a kind of triangular-shaped horn on the end of its nose. They are greyish in colour with a black or brown zigzag pattern down their body.

These snakes inject venom when they bite, but this does not typically lead to loss of life.The signs and symptoms of a bite from these snakes may include pain, bruising and swelling at the bite site, which may be progressively followed by tissue necrosis, nausea and vomiting, abnormal breathing issues, dizziness, shock, and collapse, in severe cases, necessitating immediate treatment.

Where in Spain would you find venomous snakes?

Snakes can be found across the whole of mainland Spain but different varieties prefer different regions.

For instance, the Asp Viper can be found around the Pyrenees, the False Smooth Snake is an habitant of the Iberian Peninsula and the Seoane’s viper can be mainly found in Galicia, Castilla y León, the Cantabrian coast and the Basque Country.

The Snub-nosed or Lataste’s viper can be found throughout Spain in dry and rocky habitats and the Montpellier Snake is also present throughout Spain, but with the exception of the Atlantic strip of Northern Galicia, Asturias, Cantabria and the Basque Country.

Which spiders are venomous?

There are six venomous spiders living in Spain, but the main two to look out for are the Black Widow and the Recluse.

Having said that, bites from spiders are very rare and there is no record of anyone dying from one in Spain.

Black widow spider - The Black Widow spider is Spain’s most dangerous spider. You will recognise them by the distinctive red hourglass shape on their backs.

Their venom is toxic and if they bite it will attack the nervous system and can cause blindness, excessive sweating, fever, vomiting, abdominal cramps and rapid heart rate. That being said, their venom is a lot less dangerous than the Black Widow spiders found in the US, so these extreme reactions are highly unlikely.

Luckily the Black Widow is not an aggressive species and only bites when it is surprised, threatened, or provoked. 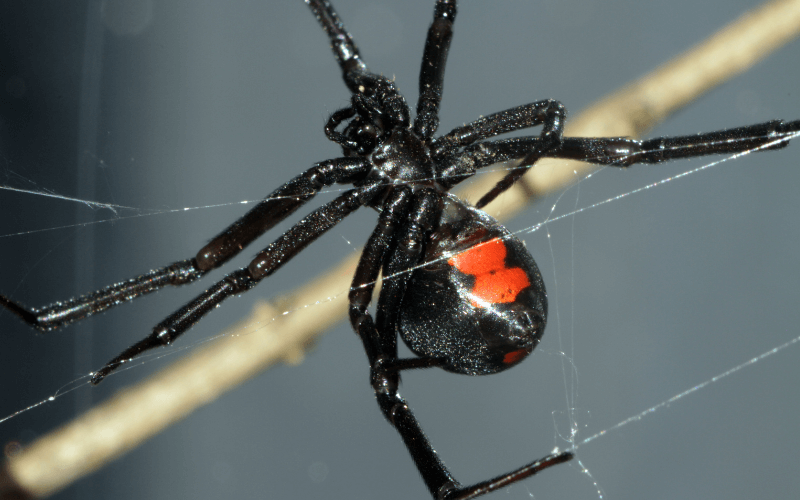 A bite might not hurt at first or even leave a mark. For some people, it feels like a pinch or a bee sting. Within the first day or two after you’ve been bitten, you may experience one or more of the following symptoms;

Back in 2021, a British tourist in Ibiza was bitten by a Recluse Spider, resulting in him having to have two of his fingers amputated. However, according to a hospital spokesperson who treated him, this is very rare as this type of spider doesn’t usually cause such serious injury.

Despite its looks, its bite causes minimal symptoms in humans. A bite can be painful but just like a bee or wasp sting.

Their bites don’t tend to cause severe pain unless its victim is attacked multiple times. This can happen when a female spider is protecting her egg sack. Otherwise, these spiders shy away from and rarely attack humans.

If bitten, symptoms tend to be swelling, minor pain and irritation, rather than death, long term harm or even extreme pain.

Although venomous, its bite is similar to a wasp or bee sting and is not a danger to humans, unless you have an allergic reaction to it. It is also extremely rare for them to bite humans.

These spiders are declining in numbers and are the only spider that is protected by the European Union. Killing or removing this spider is punishable by law. 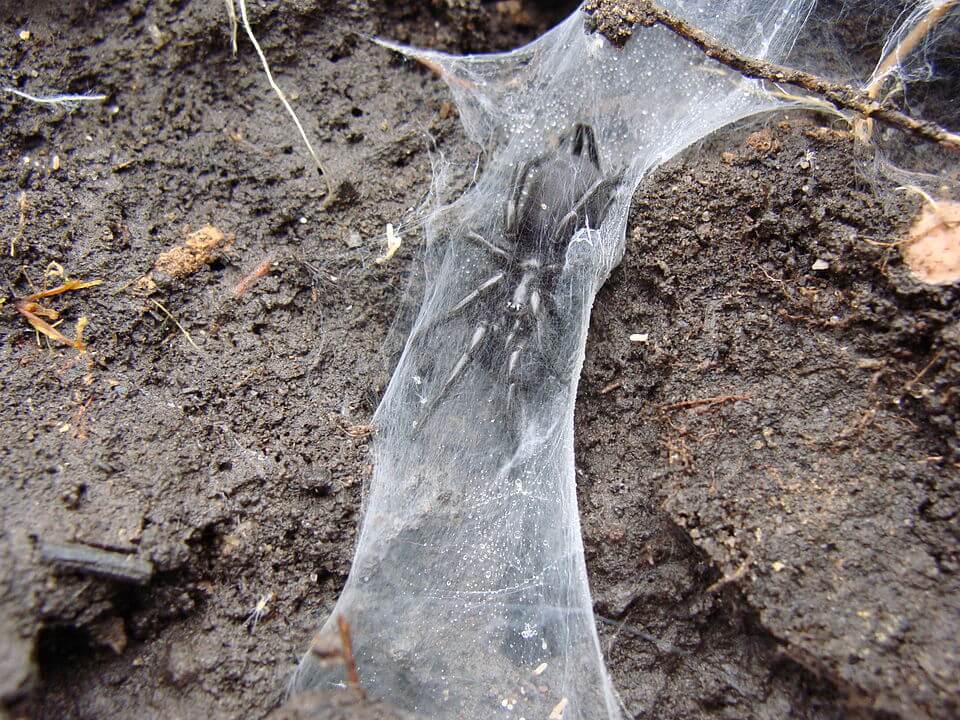 Wolf Spider - The Wolf Spider is quite large in size and can be either brown or black in colour with subtle red, brown, yellow or tan markings. The colour of a wolf spider generally depends on its habitat as they camouflage to the surroundings they live in.

Although they have venom, which they use to incapacitate their prey, it is not a danger to humans.

Wolf Spiders would also much rather run from humans than attack them, but they are capable of giving a painful bite if they are provoked. It usually only causes mild irritation, unless you are allergic to their venom.

Where in Spain would you find venomous spiders?

Like snakes, spiders can be found across the whole of Spain, but the ones mentioned above predominantly live in the following regions.

The Black Widow Spiders are most commonly found in the regions of Almería, Aragón, Andalusia and Valencia, whilst the Recluse Spider can be found mainly in Cadiz and Andalusia and the Mediterranean Tarantula is mainly native to Toledo.

The Iberian Peninsula is where you will find the Huntsman Spider, the Spanish Funnel Web resides mostly in the Cádiz and Málaga coastal areas, as well as Extremadura, Gibraltar, Granada, Huelva, Jaén and Sevilla and the largest population of the Wolf Spider can be found in the Alcornocales National Park in Andalusia.

What should you do if you get bitten by a venomous snake or spider?

If you are bitten by a snake, you should try to remain calm and seek medical attention immediately. As mentioned earlier snake bite deaths are very rare in Europe, more people die from wasp and bee stings.

Spider bites - If you get bitten by a spider, try to identify the spider and even take a picture of it if you can. This will enable doctors to identify which spider antivenom treatment is needed,

To receive the proper treatment, it is important to recognize the symptoms of a spider bite. Follow the steps below to do this… 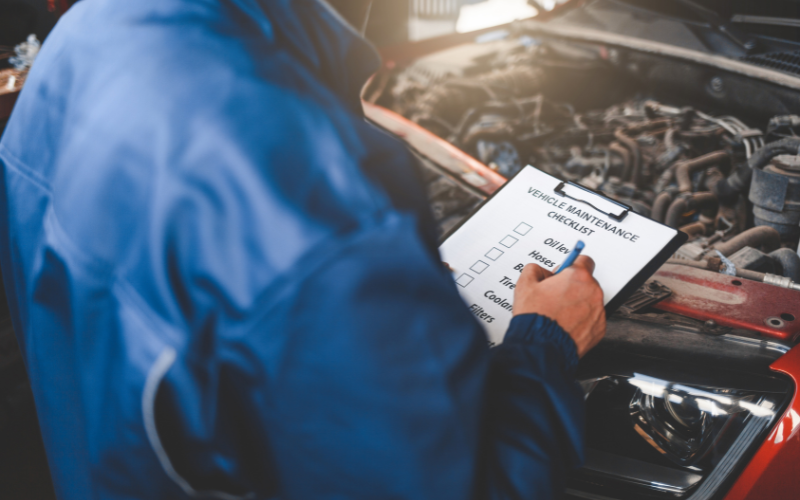