The Spanish authorities have sought to clear up the confusion surrounding entry into Spain for returning British residents.

Over the weekend, a number of British nationals who legally reside in Spain reported that they were denied entry back to Spain from the UK.

Some airlines including British Airways and Iberia are believed to have refused to accept the green paper identity document commonly referred to as the ‘Certificado de Registro de Ciudadano de la Unión Europea’ as proof of residency despite the British and Spanish Embassy having already confirmed that the green certificate was valid.

You can see an official page from the Spanish ministry clarifying which documents are permitted here.

The issue occurred after Spain restricted entry into the country on December 21 to Spanish citizens and those who are legally resident.

The measure was initially due to be in force until January 5, but has subsequently been extended to January 19.

The UK also left the EU from January 1, which only appeared to add to the confusion.

One British national, Max Duncan took to Twitter to voice his concerns after he and a number of other passengers were refused to board on Saturday.

He said, "Brit residents of Spain distressed as can't fly home from @HeathrowAirport under #covid19 restrictions as @Iberia_en said their green residence certificate not valid post-#Brexit even tho Spain's @inclusiongob and @FCDOGovUK say it is. Need clarity http://www.inclusion.gob.es/ficheros/brexit/nota_aclaratoria_green_certificate.pdf "

The British Embassy responded to Mr Duncan via their official Twitter page saying, “This should not be happening, the Spanish authorities have reconfirmed again this evening that the green residency document will be valid for travel to return to Spain as stated in our travel advice.”

It was later confirmed that Mr Duncan and the other passengers had eventually been allowed to fly and placed on a later flight.

Via their Facebook page, the British Embassy in Spain looked to clear up the confusion for travellers saying:

“Important information for British nationals that are due to travel to Spain.

“Having been in contact with the Spanish authorities over the weekend about the boarding problems faced by some UKNs wanting to return to their homes in Spain, pleased to share this important clarification from the Spanish Embassy in London.

“This clarification has also been shared with all the relevant airlines and ferries by the Spanish Embassy.

“Check out the proof of residency accepted to enter Spain." 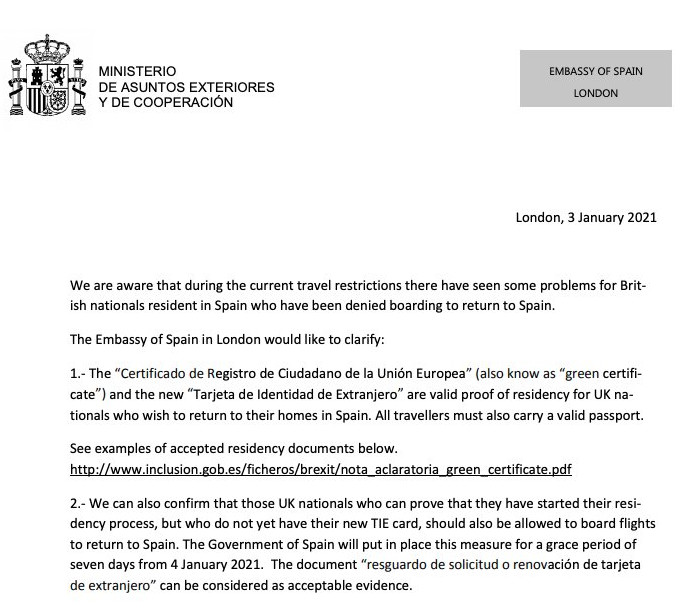 The Spanish Embassy in London also took to social media to acknowledge that they were aware of the problems for some UK nationals travelling back to Spain. They confirmed that the green A4 certificate and the new biometric TIE card were both valid proof of residency for UKN’s wishing to return to their homes in Spain.

They also stated that those who could prove that they had started the residency process but who had not received their new TIE card would also be permitted to board their flight.

They added that the document ‘Resguardo de solicitud o renovación de tarjeta de extranjero’ which is the receipt that a person receives after applying for residencia would also be considered as acceptable evidence up until January 10. Further updated details here https://www.gov.uk/foreign-travel-advice/spain/entry-requirements

The Associated Press news agency later reported Spain’s Foreign Ministry as saying that there had been an “an isolated communication problem with some airlines that affected a very small number of travellers” and that air traffic between the two countries had returned to “normality” by Sunday afternoon.

You can see Spain's official advice on valid documentation here.

PET TRAVEL: UK Granted 'Part 2 Listed' Status By EU It has now been confirmed that the UK will be characterised as ‘Part 2 listed’ by the EU for pet travel in 2021. The change will mean that pet...
Read More