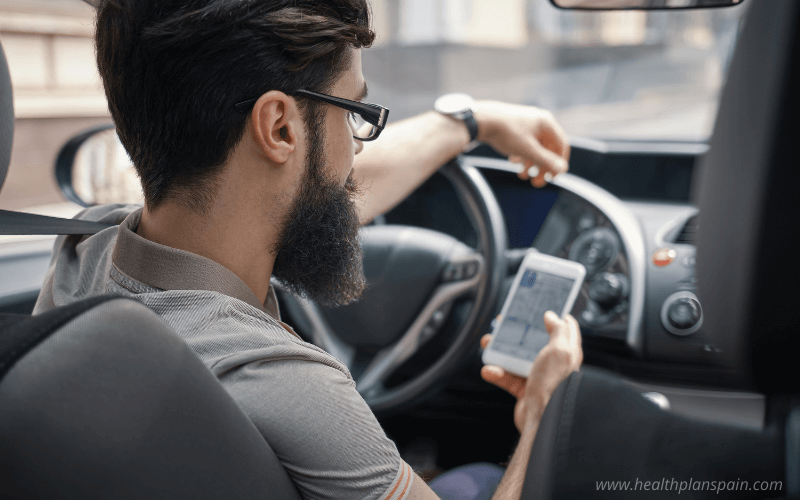 New traffic laws that will likely come into force in the next few months have been approved by Spain’s lower house of parliament.

The new Traffic, Circulation of Motor Vehicles and Road Safety Law was confirmed on Thursday by the Interior Commission and will include an increase from three to six points deducted from drivers licenses if they are caught holding cellphone devices while driving.

If however, the mobile device is in a stand or on a seat while being used, the three-point deduction will remain.

Hands-free devices will still be permitted for use.

According to the latest surveillance and awareness campaign on the dangers of distractions at the wheel of a vehicle, which was carried out between September 16 and 22 by the General Directorate of Traffic, the use of a mobile phone while driving is still the most committed offence.

The agents of the Civil Guard Traffic Group have observed a total of 304,126 motor vehicles driving on conventional roads. That has carried out 8,295 controls, in which 6,708 drivers have been denounced for carrying out actions that cause distraction whilst driving.

A whopping 43% of drivers observed were found using a mobile phone whilst actually driving, an action that is said to be equal to driving under the influence of alcohol.

Among the new regulations is a rise in the penalty for failing to wear a seatbelt, this has been raised from three points to four. It will also be obligatory to wear a helmet when riding electric scooters.

The current rule which allows a driver to exceed the speed limit by 20km per hour when overtaking a vehicle will remain despite the original draft proposing that it be removed.

Also under the new legislation, professional drivers will have to install a breathalyser system in their vehicles that will immobilise the engine, should the legal limits of alcohol in their blood be exceeded.

Personal Mobility Vehicles (VMP), such as scooters will also be prohibited on sidewalks or pedestrian areas. They must also comply with standards similar to those of other vehicles, although they may not be used on highways, expressways or interurban roads.

They will also have to have a circulation certificate that certifies that they meet the technical requirements that the DGT must approve and their maximum speed will be 25 kilometres per hour.

The DGT is also planning on making insurance for scooter riders compulsory.

The new reforms to modify the current law, which dates from 2015, will now be sent to the Senate to be approved. Once this has been done the new laws should come into force in the next few months.

The point system in Spain sees drivers start with 12 points on their licenses or eight for new drivers with less than three years of experience or those who have had their license returned after it was suspended.

Points are then removed if a driver commits an offence on the road. Two, three, four or even six points can be deducted, depending on the severity of the offence committed.

If during the two years after a serious offence (three years in the case of a very serious offence) a driver has not lost any more points, the full 12 points will be reinstated automatically.

If however, if a driver loses all of their points, their license will be suspended. The license can only then be reactivated six months later (three for a professional driver) if the offender takes a road safety course, and then successfully passes an exam on the content of that course.

According to the DGT traffic authority, distractions caused 31% of fatal accidents in Spain and the unlocking of mobile phones and reading or answering WhatsApp messages, have the worst consequences when driving.

Buckling up your seatbelt while driving, usually when seen by a police officer, is also a distraction that has seen 412 drivers receive a penalty.

In addition to these, 327 drivers were penalised for using a helmet or headphones that are connected to sound reproducing devices, other than mobile phones.

Other actions that have been most sanctioned for causing a distraction while driving are driving while eating (56), searching your car for objects (108), reading (145) or being distracted by other passengers travelling with you in your vehicle (47).