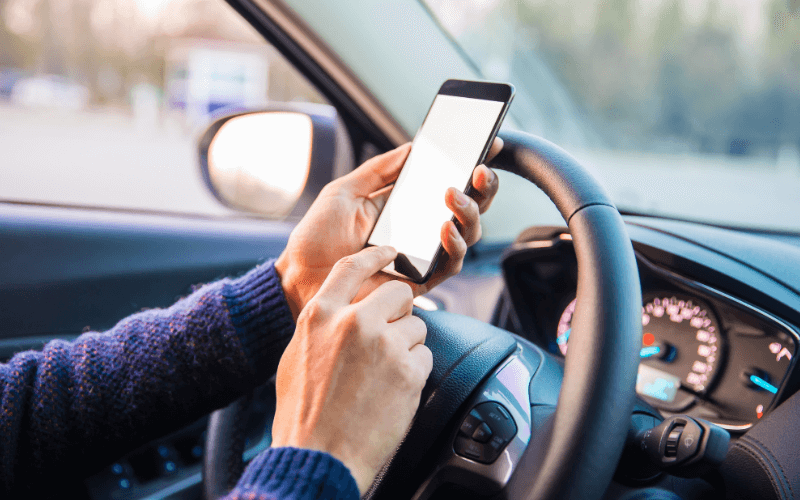 From Monday, March 21, 2022, a series of new motoring laws will come into force across Spain.

The new changes will aim to punish drivers with a major focus on minimising the number of accidents and deaths on Spanish roads caused by driver distraction.

Although the financial penalties have not been increased, the number of points that can now be removed from the licence has.

Below we list the main changes to look out for so you can avoid being caught out.

This has been a big issue for a long time and the traffic authorities (DGT) want to increase the punishment for those found to be using their mobile devices whilst driving.

It is a well-known fact that many of the accidents on Spanish highways are caused by drivers who have been distracted by tech devices.

Under the new laws, anyone found to be using a mobile phone (or even holding it) will be penalised with a deduction of six points from the licence. This is double the current three points.

In addition, the driver will also be hit with a fine of €200.

The loss of points will now be increased from three to four points for anyone not using a seat belt.

The rules also apply to those who do not use the correct child seats or restraints or where it is fitted incorrectly.

The fine for these infractions remains the same at €200.

Those not wearing a helmet will also be penalised with a loss of four points.

From March 21, it will be mandatory to change lanes when overtaking cyclists or motorcycles when travelling on roads with two lanes in each direction.

When there is only one lane, drivers must keep a strict 1.5 metres between themselves and the cyclist/motorcyclist.

Flouting this law will result in a loss of six points which is a two-point increase on the previous four-point penalty.

The existing €200 fine will be maintained.

Stopping, or parking in a bike lane, or on cycle paths, is also prohibited and will also be considered a serious violation.

Throwing objects on the road

Something else the DGT wants to crack down on is objects being thrown from vehicles.

Anything thrown from a vehicle that can cause a fire or put other road users at risk will result in a six-point penalty instead of the current four.

As this is considered to be a more serious offence, the fine will be €500.

In order to recover the points on your licence, you will now need to go two years without committing any further offences. Up until now, this period depended on the severity of any offences that were committed.

The DGT very much wants to promote better road safety awareness and to that end encourages drivers to take driver safety courses.

Anyone who does take a course will be rewarded with two points which will be added to their licence.

The legal limit of alcohol for any drivers under the age of 18 will now be zero.

This includes mopeds, microcars, motorcycles up to 125cc, bicycles and scooters. Similarly, circulating on the roads whilst under the influence of drugs is also prohibited.

Drivers are no longer entitled to exceed the speed limit by 20 km/h on conventional roads when overtaking another vehicle.

Breathalyser units will be mandatory for transportation vehicles registered after July 6, 2022. The new law requires an interface to be installed so that an Alcoholock device can be installed at a later date. As of that date, new homologated cars will have to include ten driving assistance systems.

The carrying of radar detection devices in a car will also be prohibited whether they are being used or not. Anyone caught with one will receive a three-point penalty.

Drivers will also receive a fine of €200.

Anyone found to be cheating during their driving theory exams will be fined €500. They will also not be able to take the test again within a period of six months.

Those who ride scooters have been a real target for Spain’s traffic authorities in recent months.

You can see the full list of restrictions for e-scooter users here.