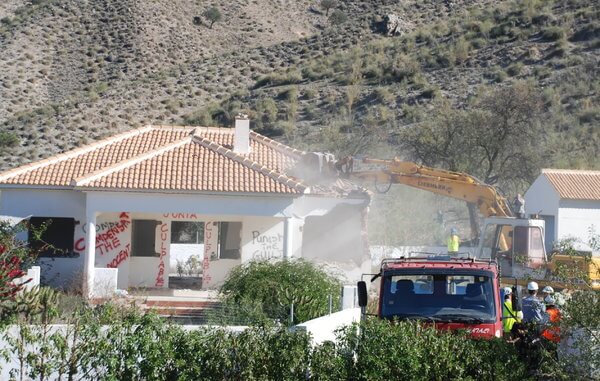 Britons who bought homes in Andalucía, Spain, that have since been declared illegal, will be breathing a sigh of relief after recent news that they are likely to be compensated before the houses are demolished. Astonishingly, according to AUAN (Abusos Urbanisticos Almanzora NO), there are an estimated 300,000 illegally built homes in southern Spain with many expats claiming they were conned into buying them. After a decade of campaigning, there is some cause for celebration at last.

A number of Britons were caught up in the furore when the dream houses that they purchased in Spain were declared illegal. The crisis hit in 2008 when hundreds of heart-broken homeowners who had innocently invested in Spanish properties before the crisis, found that their homes had been constructed illegally and could be demolished without any form of compensation.

Many homes were purchased in good faith in the period from 2000-2006 during an uncontrolled construction boom. However, today many are still without mains water and electricity. Many more have dubious electricity connections and no final habitation certificate. Now however, thanks to years of campaigning, a change in the law states that 'homes will not be demolished until the owner receives a pay-out'.

Those property owners who have homes that are still threatened with demolition will now be able to claim compensation after the Spanish Senate decided on a legal change. The amendment to the Spanish penal code was agreed upon by members of the Popular Party in conjunction with the opposition Socialists.

Some 300,000 homes were sold illegally across Andalucía, including 12,697 illegal constructions in Almanzora alone, and many foreign owners have complained that they were unaware of the legal situation of the houses during the purchasing process due to the negligence of property agents, lawyers and town hall officials.

As AUAN President Maura Hillen says, her house, "looks like a house, it is a house, but as far as the authorities were concerned, it's not a house." She unknowingly bought the illegal house in Albox in 2007. "We were left with paperless properties and we have been working to improve our circumstances over the years."

The AUAN association is currently representing owners of over 12,000 illegal homes in the Andalucian Valley of Almanzora and they have been vocal about pressing for reform of the penal code in relation to these illegal properties. They're happy to see the change, with Gerardo Vázquez, an AUAN lawyer, noting that the amendment "protects good-faith buyers, but does not go as far as we would have wished".

Many of the victims were Britons who bought houses in Almeria and AUAN is representing a number of these. AUAN have demanded that the properties are declared legal so that the occupants can gain access to water and electricity supplies, which they cannot currently do while the property has no legal permit.

AUAN began to take action in November after four homes belonging to British pensioners in the Almerian village of Cantoria were raised to the ground. They started to lobby and this has resulted in the Senate amendment. The AUAN is now supporting the attempt by another British couple to challenge the demolition order on their Andalucian home in the European Court of Human Rights. They claim that the right to property ownership is enshrined by the European Court of Human Rights.

At this stage it is unclear whether properties that have already been demolished will receive any retrospective compensation.

Are you the owner of an 'illegal' property here in Spain? Tell us about your experience and how the changes will affect you via our Facebook page.