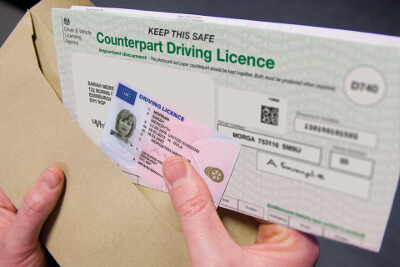 If you are a UK expat now living in Spain or if you are planning to visit Spain in the near future and need to hire a car, it is important that you are familiar with the recent changes to the rules for hiring a vehicle abroad. For those who live here permanently, you will only be affected if you are currently using a UK driving license and have not yet exchanged it for a Spanish license.

The 8th of June 2015 marked the day that the UK Driver and Vehicle Licensing Agency (DVLA) scrapped the paper counterpart to the driving license photo card. Introduced in 1998, the document replaced the old paper style licence and used to contain the history of a driver's penalties and convictions. From now on however, any driver who needs to share information about their driving background, for example to car hire firms, will have to generate a code using the DVLA website, and this is already proving problematic.

The DVLA are insisting that generating the code is simple, but thousands of people are having trouble and have registered complaints. Some industry figures are also concerned about the changes with the British Vehicle Rental and Leasing Association suggesting that the changes had been rushed through. The DVLA have insisted that the changes will make things easier, but haven't specified for whom, although Transport Minister Lord Ahmad of Wimbledon said: "Relying on the counterpart meant relying on a potentially out of date piece of paper."

Issues include that a DVLA issued code only lasts for three days, and so if you don't have an internet connection you will struggle to hire a car mid-holiday. An alternative phone line has been put in place but unfortunately it only has limited working hours. Oliver Morley, chief executive of the DVLA has insisted that. "It's very easy to view and share your driving record. Just go to GOV.UK and search for 'view driving licence" he says. "You can view your information electronically and generate a check code which you can then share with people who need to see your details (such as an employer or car hire company). If you want to, you can also download and print a summary" and store this on your mobile phone.

Important Update: As of the 10th of July 2015, the DVLA has extended the validity of the licence checking codes from 72 hours/3 days to 21 days.

Further information on this can be viewed at https://www.gov.uk/government/news/driving-licence-check-code-extended-from-72-hours-to-21-days

How to Generate a Code

You can generate a code online for free by accessing the DVLA Share Driving Licence service. You should be able to generate a 'check code' to pass to the person or organisation that needs to view your driving licence details.

Alternatively you can call the DVLA on 0300 790 6801 and leave permission for your driving record to be checked verbally by a nominated person/organisation.

The new change has caught people unaware however and a number of customers complained that they had been unable to access parts of the website. One car hire firm in Bristol had a queue of 20 people waiting, as staff struggled to access their details online, and another nearby operator had queues of customers "out of the door." There were reports that the DVLA's website had crashed. The RAC has previously warned that many people were unaware of the new rules, and research by the website money.co.uk suggests this is indeed the case – with 73% of drivers who didn't know they had to produce a code when hiring a car. With this in mind the AA has advised motorists to take their paper counterpart with them, even though it is no longer valid.

From the 8th of June 2015 any new penalty points issued will only be recorded electronically. You will be required to pay any applicable fine and submit your licence to court, but the way the court deals with the paperwork has changed. The information will be held on the DVLA's driver record, and can be viewed online, by phone or post.

Paper driving licences issued before the photocard was introduced in 1998 will remain valid and should NOT be destroyed.

If you need to hire a vehicle, firstly check with the hire company what they need to see and if they want evidence you will need to request your unique code from GOV.UK which allows you to share your driving licence details or you can download a summary of your driving licence record. The code will last up to 21 days and will allow the hire companies to make any necessary checks.

Smaller hire companies, especially based abroad, may be unaware of the changes and the new car-hire rules set out by the DVLA have already started causing confusion and stress for British holidaymakers.

For people already living in Spain - those who have now exchanged their driver's license for a Spanish one will not be affected. However, the changes will affect anyone living in Spain that still uses their UK driving licence as well as any holidaymakers visiting the country.

While the new regulations from UK's DVLA bring the UK in line with the EU, for the time being at least UK drivers in Spain need to remember to request the code in time to hire a vehicle, but not too soon so that the code can run out.