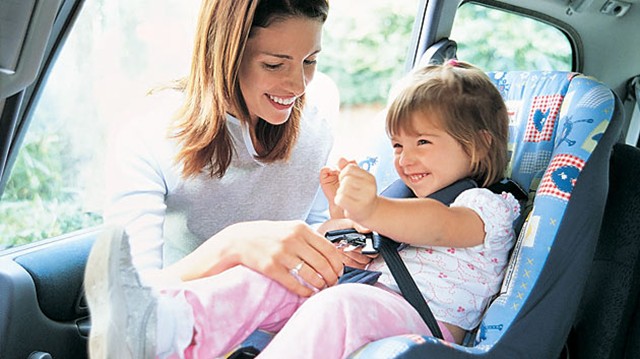 The regulations for driving with children in Spain are changing in October 2015. From the 1st of the month the new Spanish car seat law (Royal Decree 667/2015) will come into effect that will simplify the existing regulations while increasing the safety and protection of minors (children under the age of eighteen).

The new regulations are based on the child's height and the seat they occupy in the vehicle and aims to reduce the severity of injuries they might suffer in the event of an accident. If you intend to drive with children as your passengers in the future you should make a note of the changes and take action now so that you're ready for the changes.

There are four main points to take notice of.

If your child measures 1 metre and 35 cm or less, they are required to travel in the rear of the vehicle. They are not allowed to travel in the front at all, until they are taller than 1 metre 35 cm, which is usually when they are 12 years of age or thereabouts. The only exemption to this is if the rear is already full of children in child seats, but the child in the front is still required to sit in a legal, safety regulation certified seat that is appropriate for his or her age, weight and height. The air bag must also be deactivated.

Child Seats Must Be Assembled According to the Manufacturer's Instructions

While your child is not obliged to face a certain way, i.e. forwards or backwards, it is a requirement that the child's car seat is assembled in the way that has been instructed by the manufacturer. The usual rule is that babies and children up to the age of four or so, or up to 18kg in weight, should sit in a rearward-facing seat. However, an exception can be made where the seat is able to be mounted in the front passenger seat and the airbag hasn't been deactivated. In this case, it is prohibited to set the chair up so that it faces the front windscreen.

Rules for Travelling in a Taxi

Children are permitted to travel in the rear of a taxi without a child-restraint system or car seat as long as the taxi is only driving around an urban or city area.

In Vehicles with More than Nine Seats

If a vehicle has nine or more passenger seats, the driver is obliged to inform those travelling with him or her that it is a legal requirement to fasten their seatbelts. This can and should be done using a variety of means such as the display of signs, pictures or even using audio-visual means, so that the information is visible from the position of every seat in the vehicle.

You can see the original publication of the Royal Decree 667/2015 here.