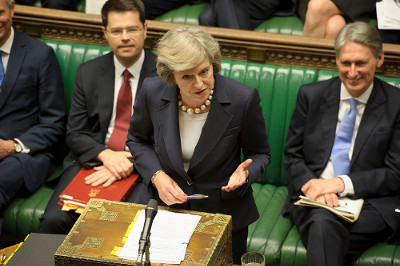 Theresa May, UK Prime Minister has announced plans to call a snap general election for 8th June 2017. She gave her reasons for doing, outside 10 Downing Street on Tuesday. She stated that while the Country is joining behind her, Westminster is not. She feels that a landslide victory now will ensure certainty and security for the years ahead as the UK tackles Brexit. A vote supporting the motion for an election was held in the House of Commons on Wednesday and was supported 522 to 13.

In spite of having a mandate for Brexit through the House of Commons, and the House of Lords, May accused the UK's other political parties of "game playing". May stated "We need a general election and we need one now. We have at this moment a one-off chance to get this done while the European Union agrees its negotiating position and before the detailed talks begin." In her statement on Tuesday, Mrs May claimed Labour were threatening to vote against the final Brexit agreement, and she was facing opposition from the Scottish National Party, the Lib Dems and "unelected" members of the House of Lords.

"If we don't hold a general election now, their political game-playing will continue and the negotiations with the European Union will reach their most difficult stage in the run-up to the next scheduled election," she said. Article 50 negotiations have a hard deadline for March 2019, just as under the Fixed Term Parliaments Act, the government would be starting to prepare for a general election for 2020.

The government know that if they were to leave an election that late, they would be at a disadvantage in EU negotiations, while trying to avoid anything politically unpopular at home.

Meanwhile, the British government has confirmed that long-term expats outside of the United Kingdom, including those in Spain, will not be allowed to vote on June 8th. It was touted after the Brexit referendum, that the government would introduce legislative measures in time for a 2020 election, that would get rid of the 15-year rule, and introduce the "vote for life" initiative. The parliamentary bills needed to amend existing legislation have not yet been tabled. The British Embassy have said that, "We remain committed to changing the law to enfranchise all British ex-pats, but unfortunately there is not sufficient time to implement this for this general election".

At this early stage, polls put the conservatives ahead of Labour by 20 points, prompting speculation that the election will be a landslide victory for Mrs May.

If you are over the age of 18 and have been registered to vote in the UK in the past 15 years, you are still eligible to vote in future UK and European parliamentary elections including the 8th of June General Election.

To do so you will need to visit https://www.gov.uk/register-to-vote

You will also need to register to vote via post which you can do by downloading the form here.

The current deadline to register to vote via post is Thursday the 23rd of May 2017.

Further information on voting by post can be found at https://www.yourvotematters.co.uk/how-do-i-vote/voting-by-post