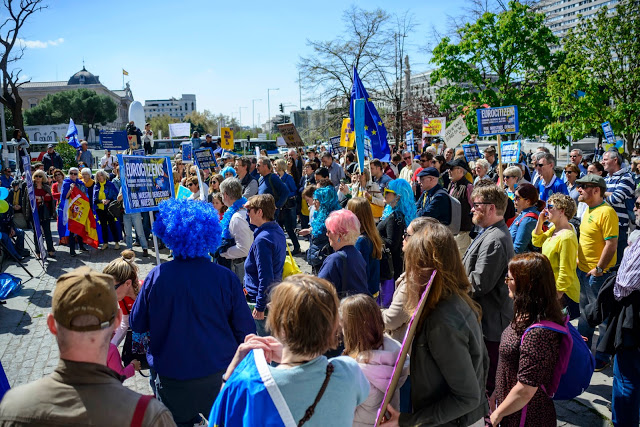 Around 400 people took to the streets of Madrid to protest against the UK leaving the EU.

Last weekend, around 1 million people marched through London to demand a people’s vote for Brexit. This was copied by approximately 400 like-minded individuals in the Spanish capital. Like the London march, passions ran high in Madrid where British migrants are deeply worried about their rights and futures in Spain.

EuroCitizens organised the march in Madrid. They are one of many protests groups that have been formed in the wake of the UK referendum in 2016 which saw 52% of the turnout vote to leave. As a result, EuroCitizens have been working hard to support the rights of British migrants so that they continue to study, work and live in European countries.

The crowd of around 400 gathered at Plaza Margaret Thatcher to protest against leaving the EU. The group was diverse, with a mix of nationalities and ages such as students and retirees. Many wore fancy dress and carried placards and flags. One of the most memorable chants of the protest included; “¡Derechos sí, Brexit no!”

Some of the reactions from the crowd include Paul Whidby who has been living in Madrid for 12 years; “It was always a bad idea in my personal opinion, but I think that the last two or three years have reinforced that. Statements that were made during the original campaign were clearly wrong, and so that’s why there needs to be a second vote to be sure that people are making the decision based on the real facts.”

English teacher Olly said; “Luckily the Spanish government has been very generous with what they’ve offered.” This refers to the fact that the Prime Minister of Spain has offered residency for the British residents in Spain in the case of a hard Brexit.

The vice-chair of EuroCitizens, Camilla Hillier-Fry said; “We truly hope that Spain continues to be as inclusive and welcoming as it has been until now…We want to keep on being a part of Spanish society.”

As we end the final week of Brexit negotiations, we are still no closer to knowing the outcome and what the future is for UK citizens in Europe.