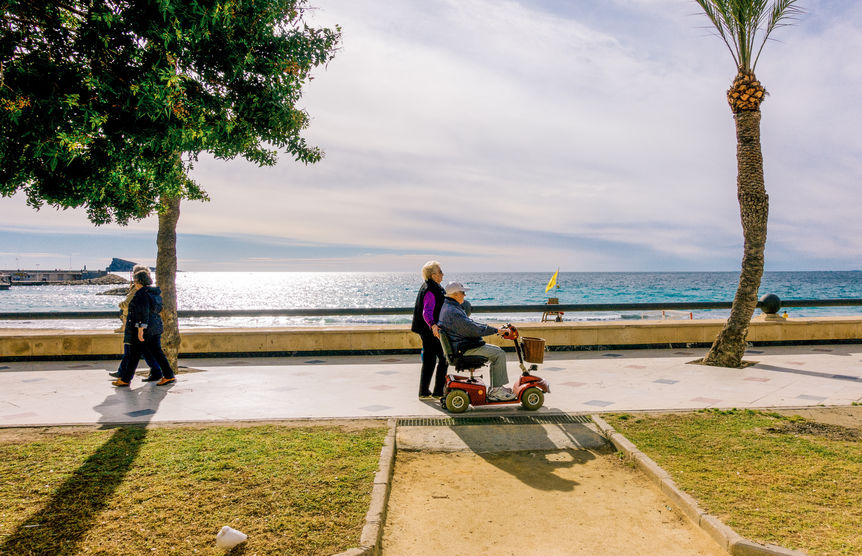 Rulebreakers face fines of up to €500 for riding mobility scooters on Benidorms pavements.

The civil chiefs of Benidorm are now bringing in new laws to ban battery powered vehicles such as mobility scooters from the pavements of the popular resort. Furthermore, anyone caught going faster than 12mph on a battery-powered vehicle will now face a fine of up to €500. This will include mobility scooters, segways, hoverboards and electric unicycles, even if the individual is riding in a cycle lane.

Furthermore, under the new rules, battery-powered vehicles will also need to be insured and come fitted with a bell before cruising the streets of Benidorm. While the laws were first suggested two years ago, they have finally been voted for in the seventh time. The next step involves a public consultation before it is written into law.

The rules come in a bid to ensure the safety of pedestrians in the area as there have been several accidents involving pedestrians in Benidorm. Furthermore, Alicante has issued similar moves. Consequently, Mallorca is considering a similar scheme.

The scooters have been known to cause fatal accidents including a 93-year-old woman who was knocked down by an electric scooter in Esplugues de Llobregat, Barcelona. Another woman died after falling off a scooter and then being run over by a truck.

The new speeding rules also come as part of Benidorm's drive on ‘cleaning up’ the area. Shops are now unable to sell saucy t-shirts and provocative souvenirs such as lighters with naked women, comedy breasts and sweets shaped like intimate body parts. Shops caught selling such goods can face fines of up to £27,000.