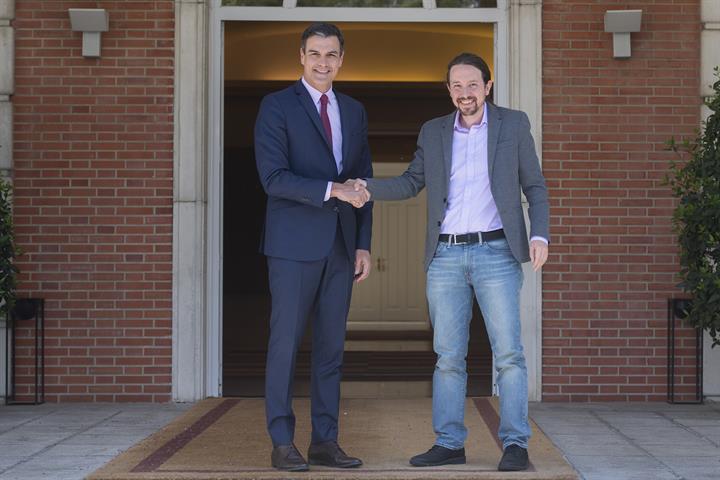 The agreement which was based on both parties forming a new 'progressive government' over the next four years was signed at the La Moncloa Spanish Congress building in Madrid. The two men who had been at logger-heads over the past seven months, sealed the pact with an embrace.

After signing the agreement Sanchez said, “It will be a resoundingly progressive government. Spain needs a stable government, not an interim one.”

However, despite winning 120 seats in Sunday's election, there is still uncertainty as with Unidas Podemos' 35 seats the two are still 21 seats short of the 176 needed to form a government.

PSOE leader Sanchez called the general election, which took place on Sunday after his party were victorious in April's election, but were unable to win enough seats to form a majority government.

The two parties had previously tried to form a coalition after April's election, however talks broke down with Sanchez refusing to give the left-wing anti-austerity party control of the country's labour ministry. It is believed that Iglesias has now been offered a position as Sanchez’ deputy PM.

With both PSOE and Podemos losing 10 seats between them, it was the right-wing VOX party that saw the biggest gains winning 52 seats up from April's election tally of 24, making VOX the third most powerful party in the country.

Iglesias said that the pact between the two parties was the best 'vaccine' in which to fight the far-right in the country.

Center-right Ciudadanos, which was formerly the third biggest party in Parliament, collapsed on Sunday losing 47 seats and prompting the resignation of its leader, Albert Rivera.

Sanchez will now need support from smaller regional parties including Mas Pais and the Basque Nationalist Party (PNV) if he is to be reinstated as PM and avoid another stalemate with the possibility of VOX garnering even more voter sentiment.

Pablo Casado of the convervative Partido Popular (PP) has already said that his 88 MPs would not be forming a "radical left" government.

Any support from the other major party, Ciudadanos, has also been ruled out.