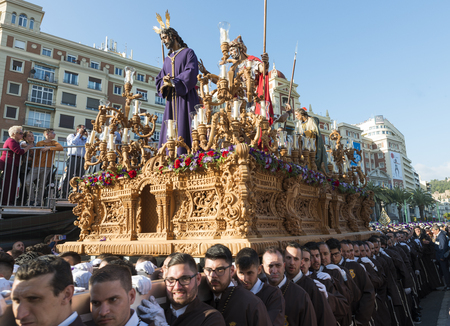 In Spain, Easter is not just resigned to Easter Sunday. Instead, the whole week that runs up to Easter Sunday is celebrated. This week is called Semana Santa, translated as Holy Week, and for Spain, it is the biggest religious celebration of the year.

In 2018, Semana Santa will begin on the 25th March and run up until Sunday 1st April which is Easter Sunday. Good Friday is a national holiday and Holy Thursday is a public holiday across Spain except for in Catalonia, Valencia and Cantabria.

What Does Semana Santa Involve?

Across Spain, Spanish people take to the streets to re-enact the Passion. With public holidays, it is a time for people in Spain to celebrate with friends and family with a focus on eating and drinking as well as the religious significance. Most people will attend one of the many processions that take place during Semana Santa.

Wherever you are in Spain, you will be close to an elaborate procession event taking place during the Holy Week. These processions are a long-standing tradition in Spain. In fact, the processions and the brotherhoods called Cofradías, who take part in the processions, are known to date back to the Middle Ages.

What Happens During the Processions?

The processions are also known as 'penance processions'. Usually, it will involve the Cofradías parading from their church to the cathedral in the city. The processions will vary depending on where they take place, however, most local villages and towns get involved as well as the big cities. You will see the start of the procession marked by members of the procession carrying a giant cross.

Music is also important. If you attend a Semana Santa procession, you are likely to witness a live marching band that accompanies the procession, playing religious music.

Another interesting aspect is the clothing worn during the procession. The people parading will usually wear a tradition Capirote. These are long white robes with belts and a very tall conical hat and mask that covers their faces.

The traditional dress was originally for people atoning for their sins and completing penance and their faces were covered so that others would not recognise them as sinners. Women in the processionals will often wear a black lace veil called a Mantilla.

The procession will also involve carrying religious sculptures or floats adorned with flowers, candles and religious stories. These floats are called Pasos in Spain and are a must-see, particularly as many of the renowned Spanish artists design or sculpt the images on display.

Again, the Pasos are a tradition and have been used for hundreds of years.

What Food Is Available During Semana Santa?

There are several special treats that you can enjoy during Holy Week in Spain. One of which is a small pastry called Pestiños and consists of sesame-flavoured dough that is fried and then topped with honey. Another is Torrijas which is bread soaked in milk and egg and then fried and coated in sugar. Flores de Semana Santa are also sweet, fried pastries that are shaped like a flower.

During Semana Santa a meat pie called a Hornazo is also popular and there is an almond and sugar version for those with a sweet tooth. Traditionally, children may receive a Mona de Pascua as an Easter gift. This is a beautifully decorated cake topped with chocolate eggs or painted boiled eggs.

Where Should I Go for Semana Santa?

In Málaga, there is a lively festival atmosphere during Holy Week. Women will dress in black and wear the mantilla while members of the brotherhood will wear purple robes and carry thrones through the streets.

Seville holds several processions during Semana Santa all of which are lively and stunning to see. The main draw is the procession of Good Friday. As well as the procession, you will see glimpses of flamenco dancing taking place along the route.

With many members of the brotherhood dressed in pure white costumes, the processions in Valladolid are already mesmerising. Added to this, Valladolid is known for the ornate floats used.

The brotherhood in Cordoba take the processions very seriously with a mass of religious zeal. Many will walk barefoot through the street holding lit candles which is respectful to the tradition that began back in the 12th Century.

In the very heart of Spain, you can enjoy a very traditional Semana Santa. Following all of the traditions without influence from outside sources, Guadalajara is the place to see celebrations that are as authentic as possible.