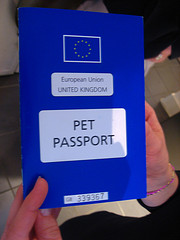 A few years ago it was a nightmare if you wanted to take your pets with you abroad. Before the advent of pets’ passports, you were left totally exposed to the vagaries of the various countries immigration rules, which often stipulated protracted terms of quarantine for travelling pets.

During this time they were monitored for signs of any illnesses and/or conditions, before being allowed to legally enter the country. This was a considerably distressing time for both owner and pet and actually prevented a lot of people from realising their dreams of moving abroad.

Traditionally it has always been the UK that has been the fly in the ointment when it comes to allowing animals into the country but who can blame them? Keeping Britain rabies free was the main priority and they operated a particularly strong policy which demanded that animals were subjected to a six-month quarantine period before being allowed in.

Six months is of course an awful long time to be separated from your beloved family pets but with the introduction of Pet Passports and the Pet Travel System, thankfully that has now all changed. So providing that pets can fully meet the relevant qualifications, no quarantine and therefore separation is now necessary.

Although the rules and regulations for bringing pets into Spain are less stringent than they are in the UK for example, there are still certain formalities that need to be observed. So to help you to understand the requirements, we have put together the following short set of notes.

Each animal should be accompanied by its own veterinarian certification, which must be issued by a registered vet and must include the identification details of the animal’s owner, a description of the animal and its origins, the number of the microchip or tattoo, its location, its date of creation and information regarding current rabies vaccination status. The validity of this certification must last either for 4 months, or at least until the expiration date of the last vaccination, whichever date happens to fall first.

Your pet will not be allowed into Spain unless all of the above mentioned criteria have been fully satisfied but it is also worth appreciating that the new European pet passports to all intents and purposes replace the old veterinarian certificates and are all that is necessary to allow your pet to cross most European borders.

Once issued, a pet passport lasts for the life of the pet. They come in various formats, sometimes no more than a small pink A4 sheet of paper, or sometimes in a small blue booklet form. The latter should not be confused with small purple folder that many vets issue as a record of the pet’s vaccinations.

A pet passport is the integral piece of documentation that anchors down the Pet Travel System (PETS) and provided that it carries all of the current information required by law (type of pet, ownership details, microchip or tattoo details, and rabies vaccination status) most countries will accept this document in lieu of all others.

The Pet Travel System in itself, is a system that was designed in the UK with the specific aim of circumventing the awful 6 month quarantine system for pets returning to the UK from abroad. Such has been its success that it has now been adopted by many countries across the world.

Our pets today are an important and integral part of our families and it is therefore important that they should be with us wherever we are. Pet passports and the pet travel system have enabled that desire to be fulfilled, so it is important that you should make sure that they are always kept fully up to date and that way you never need to be apart from your furry friend.

More advice on bring your pets into Spain and the U.K can be found via the DEFRA website.

REVEALED: The Most Popular Baby Names In Spain Expat Tips

Are These The 12 Best Beaches In Spain? Expat Tips

Are These The Top 11 Spanish Foods? Expat Tips

British Expats in Spain: Are These The Most Popular Areas To Live? Expat Tips

Riding A Motorcycle In Spain With glorious year-round weather, Spain is the perfect place in which to ride a motorcycle, moped or scooter ('Motos' as they are commonly known as...
Read More

EHIC: Will The Card Still Be Valid Post-Brexit? With the end of the Brexit transition period fast approaching, many Brits are still waiting for clarification on what life after Brexit will look like...
Read More

Preparing For Brexit: What To Expect From January 2021 The European Commission has published a document titled ‘Getting ready for changes: Communication on readiness at the end of the transition period...
Read More

10 Simple Tricks To Keep Flies Away Everyone knows how to deal with the dreaded mosquito in Spain but how about flies? Flies are not only annoying, they’re also major disease...
Read More

Cost Of Living In Spain v UK 2020 Are you thinking of moving to Spain from the UK? If so, you’ll need to find out the average cost of living in Spain and how it compares to the...
Read More

Fines And Penalties On Spanish Beaches Whether you live here in Spain full-time or are on your holidays, there is a very good chance that you will want to visit many of the beautiful...
Read More