The Spanish government is continuing with its plans to reform how self-employed workers pay their social security contributions.

On Thursday, José Luis Escrivá Minister of Inclusion with the department of Social Security and Migration, presented the latest proposals which would see autonomo workers in Spain pay their monthly contributions based on how much they earn rather than the current system of paying a fixed monthly amount regardless of their income.

Under the current system, self-employed workers pay a fixed amount of monthly contributions which is based on their contribution base. However, around 85% use the lowest base amount of €944 which sees many paying around €250 or more each month.

This system has always had its critics and can mean that many low paid workers pay a disproportionate amount of contributions.

There are two fundamental ways in which the new system will differ from the current one.

Under the new proposals, self-employed workers in Spain would stop choosing their contribution base and contribute according to the income they declare.

There would be 13 income brackets which would be based on the self-employed persons monthly income and would range from €600 to €4,050. This would see the lowest earners pay a minimum of €184 per month, however, those at the top end of the scale would need to fork out around €1,267 per month in contributions. 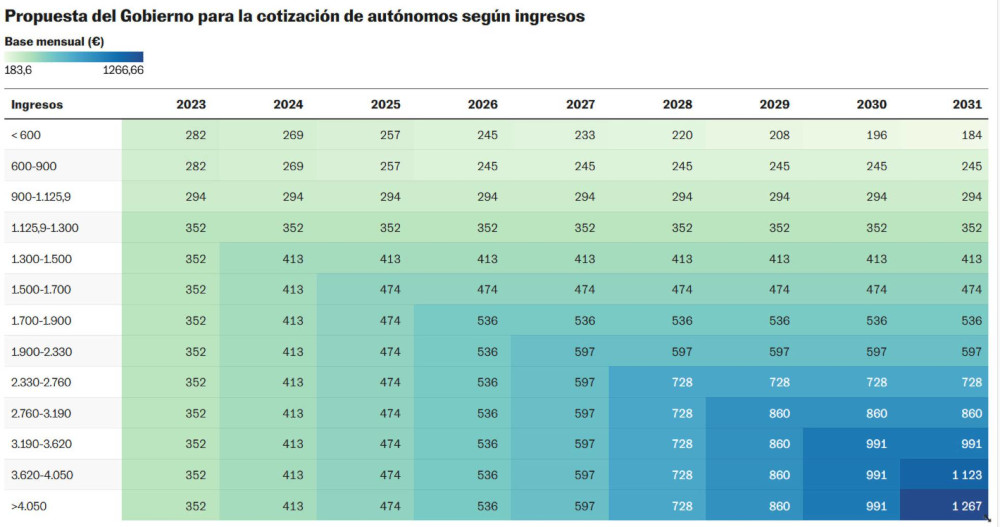 The second major change would be that those who earn less than €1,125.90 per month, would pay less in contributions than they do now, however, anyone earning more than this amount would pay more.

The Spanish government says its aim is to make the contribution system more flexible with self-employed workers able to change their base figure up to six times a year to reflect their often inconsistent income which usually fluctuates each month.

Under the new plans, it has been suggested that two in three workers will pay less in social security payments with some paying up to €600 a year less than they do under the current system.

The proposed system would come into effect from 2023, however, it is believed that there would be a 9-year rollout period from 2023 to 2031 which would see the monthly amount progressively reduced each year. The amounts paid for 2031 will be the minimum and would be those that would be used from then on each year.

The proposal, which will be discussed further on Monday, has been well-received by two of Spain’s main self-employed unions, UPTA and UATAE, however, Spain's freelancer association ATA which is a part of the Spanish Business Confederation (CEOE), strongly criticized the move.

President of the ATA, Lorenzo Amor said the government “had no idea what it is like being self-employed,” as reported by Europa Press. UATAE, however, said Spain needed to move to a “fairer and more supportive system" for the more than three million of Spain's self-employed workers.