Spanish authorities confirmed on Tuesday that they will be extending the current ban on UK travellers entering Spain and Andorra until February 2.

The country’s Health Minister, Salvador Illa announced that the decision had been made due to the recent spike in mutant Coronavirus cases in the UK in recent weeks.

Only 70 cases of the British strain have to date been identified in Spain, however, it is believed that the variant is more transmissible than the original strain.

It means that up until 6 PM on Tuesday, February 2, only Spanish residents and British nationals legally resident in Spain will be permitted to enter.

The measure will not only apply to air travel but also to those entering via sea. Those looking to transit through Spanish airports via the UK will also be prohibited.

The initial restrictions first came into force on December 22 and were due to end on January 5, but these were subsequently extended to January 19.

According to Illa, the restrictions could be lifted at any time if the situation in the UK improves.

“At the present time, some uncertainties remain about the scope of the new variant of SARS-CoV-2. The epidemiological situation in the United Kingdom has been progressively worsening, currently presenting a cumulative incidence at 14 days of 1,031 cases per 100,000 inhabitants.

“This situation, together with the detection in Spain of cases linked to the new variant, makes it necessary to maintain these measures until it is known of its impact on the evolution of the pandemic and, especially, in what may affect our country".

However, at a press conference on Monday, the director of the Health Ministry’s Coordination Center for Health Alerts (CCAES) Fernando Simón declared that the recent spike in Spain was not down to the UK variant, but due to Christmas gatherings over the holiday period.

It comes as the UK tightens its own restrictions on travel, with new measures coming into force this week.

From 4 am on Friday, January 15 anyone entering the country via boat, train or plane including UK nationals will need to present a negative Covid test (PCR, TNA or LAMP) which will need to have been taken up to 72 hours prior to departure. They will also need to complete a passenger locator form.

Required Documentation for Entry into Spain

The Spanish government and the British Embassy in Spain recently clarified the situation in regards to the documentation required to enter the country after it was reported that a number of those legally living in Spain were denied entry.

It has now been confirmed that the following documentation will demonstrate to the Spanish authorities and airlines that you are legally resident and therefore permitted to travel to and enter Spain.

Up until January 10, the Spanish authorities were also accepting the "Certificado de Registro de Ciudadano de la Unión Europea", the receipt provided to those who had applied for residencia, but this is no longer accepted now the grace period has ended.

You can see the official page here from the Spanish government. 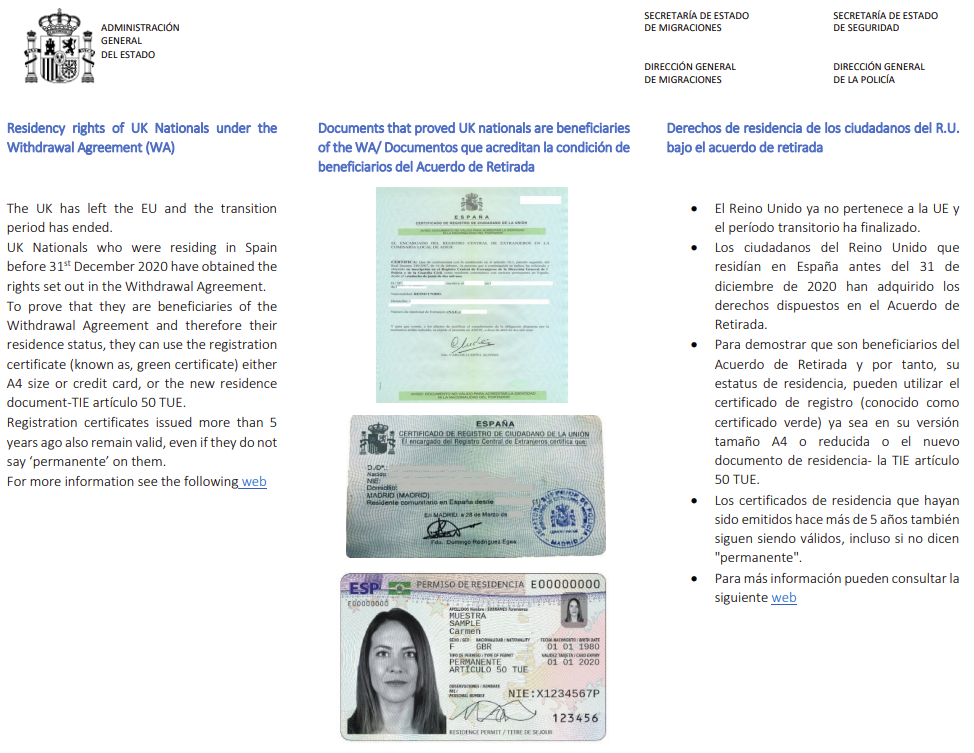 The news as Spain registers its highest number of new Coronavirus cases.

On Monday the country’s Ministry of Health revealed that there had been 61,422 new cases registered since Friday with over 400 people losing their lives bringing the total to 2,111,782 infections and 52,275 deaths since the pandemic began in March.

PET TRAVEL: UK Granted 'Part 2 Listed' Status By EU It has now been confirmed that the UK will be characterised as ‘Part 2 listed’ by the EU for pet travel in 2021. The change will mean that pet...
Read More