We all have them and if you plan on living here in Spain, you will usually have one or two yourself.

After doing a little web research, we discovered some of the most common questions people ask about this beautiful country.

Many of the questions you have about life here in Spain can be found in the hundreds of articles that we’ve written over the years.

However, we can’t read minds so we thought we would ask everyone’s favourite search engine Google to share some insights with us.

Below we list what appears to be some of the most common questions that people ask about living in Spain.

1. How many people live in Spain?

At the last count, Spain had a population of 46,785,134. This makes it the EU’s fifth-largest country behind Germany, France, the UK and Italy. It also means that Spain’s citizens account for approximately 0.6% of the world’s population.

However, according to The Guardian, Spain’s population is set to drop by around 11% by 2050 due to lower birth rates.

2. Where is the best place to live in Spain?

This question is of course pretty vague. The ‘best’ doesn’t give us much to go on. Best beaches, best for work, best for nightlife, best for things to do?

Where you decide to live in Spain can very much depend on the lifestyle you are looking for. Generally, you will have two options. You can live in the countryside and experience the ‘old Spain’ and its slower pace of life. Alternatively, you can live on the coast and enjoy a more modern lifestyle enjoying the beach scene.

As the coastal areas are more geared towards tourism, you will generally find a lot more to do including lots of fun activities and days out for the family.

3. What are the cheapest places to live in Spain?

According to the Numbeo website, Santa Cruz de Tenerife is the cheapest city in Spain to live in with a cost of living index of 46.02 and a rental index of 18.79. As you can see below, some of Spain’s most popular cities including Madrid and Barcelona come out way down the list in terms of cost of living. Avoid these if you have a smaller monthly budget to live off.

4. How much does it cost to live in Spain?

Although living in Spain isn’t as cheap as it once was, it’s still possible to live here quite comfortably on a modest income which can’t be said of other countries such as the UK.

5. Which is the best city to live in in Spain?

Some of the most popular cities in Spain in which to live are Madrid, Barcelona, Malaga, Alicante and Valencia and this is where many British nationals tend to reside.

Living in one of Spain’s larger cities will present you with greater work opportunities, many of which will be based around tourism. There will also be plenty of schools and universities to choose from.

Alicante, Seville and San Sebastian are three other alternatives for those looking to make the move.

6. Is it expensive to live in Spain?

This ties in with the question further up on the cost of living in Spain.

The answer is of course...it depends.

Spain is a huge country, so the question is a little unclear.

Living inland in a small town, shopping at the local shops, buying locally produced food and eating out at the local restaurants will usually be a lot cheaper than buying your groceries and dining out in a larger city such as Madrid or Barcelona.

Looking at data from our friends over at Numbeo, in 2022, Spain was 21st on the list of the most expensive countries. Spain was well below other popular European destinations including France, Germany, Italy and the UK. 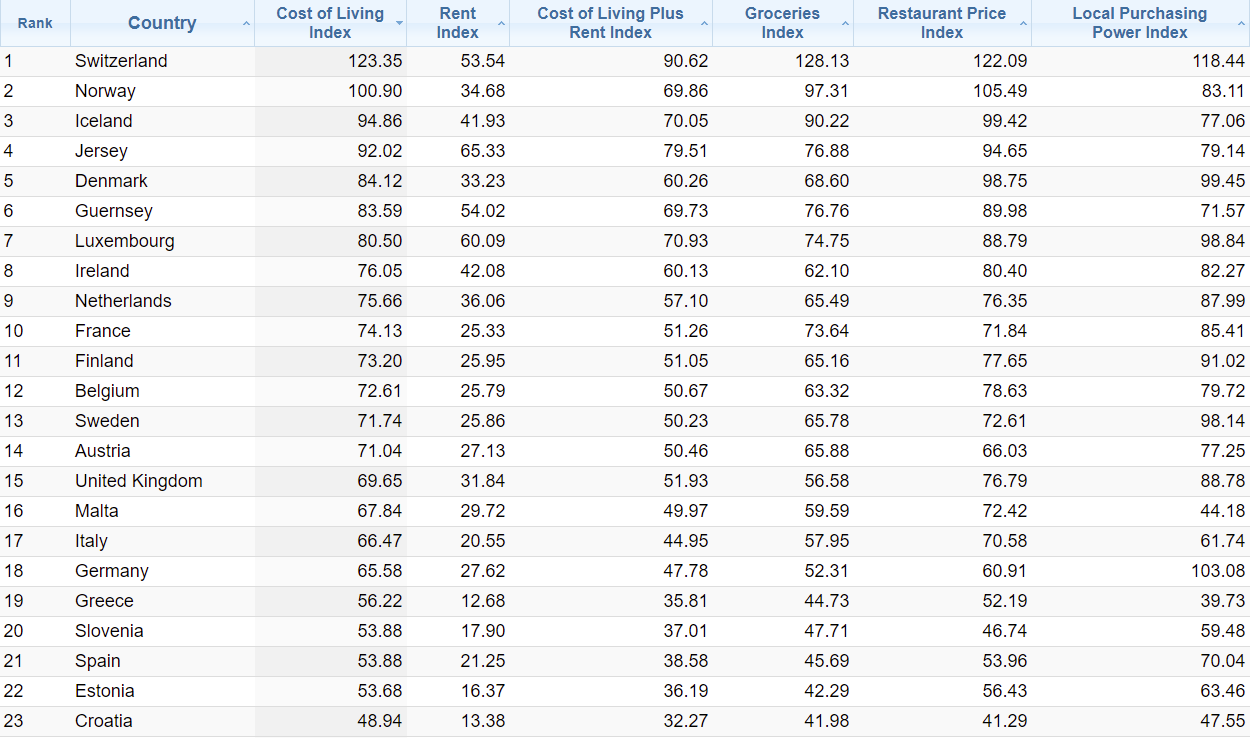 Life in Spain is very laid back. Spaniards love their spare time and take every opportunity to enjoy the lifestyle on offer due to the fantastic climate.

Spaniards generally enjoy a siesta between 2 and 5 pm which is when the shops and banks are usually closed. Many towns become like ghost towns during this time of day so that the locals can get out of the sun and cool off.

As a result of the obligatory siesta, Spaniards generally eat later in the day with many not eating their main meal until 9 or 10 pm.

Then there’s the bureaucracy. Spain is famed for being a bureaucratic country. Anything official usually takes time. If you are going to the bank, post office (Correos) or Townhall (Ayuntamiento), expect to wait! It’s just the way it is here!

Another thing to consider is the month of August. This is when everything comes to a standstill and is the month that Spaniards enjoy their vacations often heading to the coast.

Don’t expect to get too much done in August. It’s usually pretty damn hot as well with temperatures reaching 30c or more.

8. How many British expats live in Spain?

This one can be a little difficult to pinpoint due to a large number of expats not being officially registered.

In late September 2019, Spain’s Interior Ministry put the number of Britons officially registered with the Spanish authorities at 365,967.

This number could be significantly higher with the official numbers set to grow considerably in the run-up to December 31, when the Brexit transition period ends.

However, according to data provided by Statista, in 2021, there were 313,975 British nationals living in Spain.

It is thought that around 50% reside in the popular provinces of Alicante and Malaga.

9. Is it cheaper to live in Spain?

Once again, this is another one of those vague questions that people use when searching online.

As we alluded to further above, Spain is one of the cheaper European countries in which to reside and is generally cheaper than living in France, Germany, Italy and the UK.

10. Can I live In Spain after Brexit?

If you are resident in Spain before the end of the Brexit transition period on December 31, your rights under the negotiated Withdrawal Agreement will be maintained. You will therefore be able to continue to live and work in Spain as before.

The immigration rules beyond the transition period are yet to be established. If you are considering moving to Spain to live in 2021, different immigration rules will apply. These will depend on whether you will be a retiree, self-employed, employed or are studying in Spain.

We would encourage you to follow the official UK government on living in Spain to stay informed of all the latest updates.

You can find out more about getting residency in Spain here https://www.healthplanspain.com/blog/expat-tips/115-residencia-applying-for-residency-in-spain.html

11. What currency is used in Spain?

In January 2002, Spain moved from its much-loved Peseta to the Euro. The Peseta had previously been used from 1869.

12. How many regions are there in Spain?

Malaga is located in the south of Spain on the Costa del Sol coastline.

Malaga is one of eight provinces in the autonomous community of Andalusia.

14. Where in Spain is Barcelona?

Barcelona is located on the northeastern coast of Spain and is the largest city in the autonomous community of Catalonia.

15. How many airports are there in Spain?

Spain has a total of 59 airports, however, the busiest five are:-

Yes. Spain’s not all sun, sand and sangria you know!

Spain has five different ski resorts with a number in the Pyrenees on the French border and to the south of the country in the Sierra Nevada’s.

There are also ski resorts near Madrid, in the northwest of the country along with Galicia, Leon, Cantabria, La Rioja and Teruel.

Bizarrely, if you were to visit the Sierra Nevadas, you could spend half your day on the slopes and the other half on the beach! 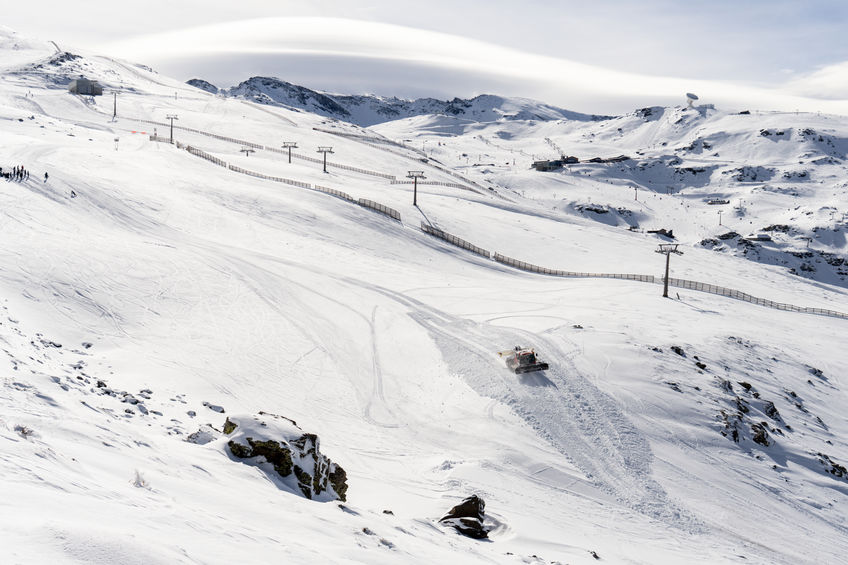 The income tax rates are on a sliding scale and increase the more you earn.

You can find out everything about Spanish tax rates and how to file a return here.
https://www.healthplanspain.com/blog/expat-tips/306-how-to-file-an-income-tax-return-in-spain.html

18. Where in Spain is Andalucia?

Andalusia or ‘Andalucia’ is located in the south of the Iberian Peninsula and sits at the very bottom of the country.

Andalusia is the country’s second-largest and most populated autonomous community.

The autonomous community is made up of eight individual provinces which are Almería, Cádiz, Córdoba, Granada, Huelva, Jaén, Málaga and Seville.

19. How many languages are there in Spain?

There are five main languages spoken in Spain. There are Aranese, Basque, Catalan, Galician and Spanish (Castellano/Castilian)

Castilian Spanish is the most widely spoken language in the country with around 45 million speakers.

Catalan is spoken mainly in the region of Catalonia with Galician spoken in the northwest region of Galicia.

Basque which is sometimes referred to as Euskara is spoken by around 700,000 who live in the very north of the country which borders France. Unlike the other four languages of Spain, Euskara has no tie to the Romance languages.

The last language is Aranese and is spoken in the Val d’Aran region in the northeast of Spain and derives from the Gascon dialect of Occitan.

You can find out more about the five Spanish languages here.

The year-round temperature in Spain is very mild, although it will depend on the time of year and the region you are in.

The country on average enjoys over 3,000 sunshine hours each year with the mildest temperatures occurring during Spring and Autumn.

The hottest and driest months of the year are July and August with temperatures easily exceeding 30c.

The coldest months of the year are December, January and February and this is when the country experiences the most rainfall.

The Spring months between March and June are the nicest for visiting Spain or getting out and about discovering everything the country has to offer. During Spring there is plenty of sunshine and the temperature is mild allowing you to enjoy outdoor activities.